Book: Presentation of Land of Milk and Money by Anthony Barcellos – UMass Lowell 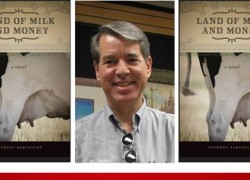 Novelist Anthony Barcellos will open the Portuguese Studies Initiative, a series of upcoming book presentations by Portuguese-American authors at the University of Massachusetts Lowell.

The event, scheduled for  March 28, at 7 p.m.,  is  co-sponsored by the UMass Lowell Center for Educational Partnerships in Portugal; the College of Fine Arts, Humanities and Social Sciences; and Center for Arts and Ideas in collaboration with the Center for Portuguese Studies and Culture at UMass Dartmouth.

The author will read from his debut novel, Land of Milk and Money, (Tagus Press, 2012). The story revolves around the immigrant Francisco family, from the Azores, who built a prosperous California dairy farm. The future of the farm becomes a source of contention among descendants competing to inherit livestock and tracts of farmland.  The trial over the farm’s legacy drives wedges further into the family.

A native Californian, Barcellos grew up speaking Portuguese on his grandfather’s dairy farm in Porterville, California, a rural community in the middle of Tulare county, in the San Joaquin Valley, Central California.

Barcellos’ experiences, within his own immigrant family as well as in the larger Portuguese immigrant community, gave him the raw material for his fictional writing. He lives in Davis California, and teaches mathematics at American River College in Sacramento.