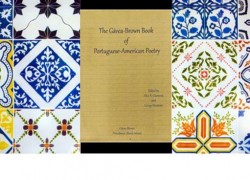 The Gávea-Brown Book of Portuguese-American Poetry, edited by Alice R. Clemente and George Monteiro, is a remarkable collection of poetic offerings. This publication brings together representative work of twenty-four fine Portuguese-American poets.  The volume covers a significant span of time, beginning with the poetry of Emma Lazarus (1849-1887), and continuing through living authors who have made significant contributions to the world of literature.

The book is an excellent introduction to these writers’ efforts that should be of interest to anyone who would like to know more about the richness and variety of compositional styles within the Portuguese-American heritage.

Portuguese poetry is built on a foundation that was solidified during the troubadour era in the 1100s in Portugal, when it reached a unique culmination when Dinis I (1261-1325) of Portugal became the poet-king of the nation.   This volume represents the rich heritage of exemplary writing continuing through many generations.

The selection of writers is based on their heritage of Portuguese ancestry, combined with portions of their lives in the United States, and their authorship of works in the English language.  Given the time period covered in the anthology, there are some common themes that appear regularly throughout the anthology.  The importance of water and sea, the centrality of family relationships, and the feeling of being outsiders are themes that show up quite often through the volume.

Given the broad net cast by the compilers, it is no surprise that many different poetic traditions and innovations are pulled together in this collection.  Since it is unfortunately not possible to review all twenty-four poets in depth, this overview will touch on a few of the writers and their contributions.

Emma Lazarus is the foremother of this lineage. She was born in 1849, a descendant of Portuguese Sephardic Jews.  Her work, “The New Colossus,” is justifiably famous due to the inclusion of its lines “your tired, your poor, your huddled masses” carved in stone at the base of the Statue of Liberty.  This work may well rank as one of the best-known poems in the United States, a reflection of an ideal immigrant welcome, which has unfortunately not always been a reflection of attitudes towards newcomers in America.

Although her collected works were published by her sister in 1889, two years after her death, some of the poems still seem quite contemporary.  Her descriptions in “Long Island Sound” reflect the beauty of the environment:

“The quiet fishing-smacks, the Eastern cove . . .

This poem presents a snapshot of the water and its environment, but also is cast in terms of the author thinking back to this scene in her memory, with a suggestion of nostalgia for the past.  This wish for a past time, especially when tied to the ocean, forms a repeating motif in various poems across this anthology.

John Rodrigo Dos Passos is a widely acknowledged novelist and poet, whose grandfather was born in Madeira.  He is another writer who is especially well known due to his overall contributions to the worlds of both fiction and poetry.  In “Winter in Castille,” he writes that the “promiscuous wind wafts idly from the quays/A smell of ships and curious woods and casks/And a sweetness from the gorse . . .” In just these few lines, he captures the wanderlust and inquiring minds that characterize the Portuguese mentality from a historical perspective.

bounty, her fragile joy, all there is flows

easily from the placid mind of God,

and she can be touched by Him, indeed,

is touched by Him continually–she

Frank X. Gaspar is a very well-known and respected poet who is represented in the collection.  His remarkable poem, “Tia Joanna,” reflects on a woman entering a church who believes in the “building’s solemn space, that”:

This woman’s devout hope sustains her as she ministers to her husband who is “tired from the boat and the day’s work” and whose cough grows deeper, a dire reminder of the physical suffering of the immigrant working at the sea.  In this work in particular, Gaspar draws together many of the themes reflected in various poems in the anthology: the sea, the sense of otherness, devotion to the holy, and the mysterious strength that infuses this woman.

Another common theme in this book is the search for language, as in “She Wants It Back,” by Nancy Vieira Couto, another distinguished poet who is also an editor. She writes:

“I want it back, she says in her soft language,

her language of soft leather, of tanner

and tooler, her language of the crush

This evocative description calls out the phrases of a mysterious communication that tell about much more than the common words of a community. Instead, in the fine use of descriptive language, the author pulls us into a different community and heritage.

Emily August Monteiro Morelli also strongly invokes the past in her fine work. In “Armação de Pera”, she writes about watching boats “depart for the night,” and the story of a father’s “office in colonial Angola, her mother’s Angolan porches, the/history of Portuguese explorers and/Moorish occupations. She spoke in memory both black and/white and sepia . . .From Angola, she smiled, from my life as a girl.”

The poet brings in the ever-present sense of the sea and its place as a point of departure.  The experiences she draws on in these memories of Angola remind the reader of childhood memories of a parent’s yearning for the porches of the past.

Carlo Matos is an Azorean-American who is both a playwright and a poet.  His lovely poem, “Rooster,” talks about a set for a puppet show. Here we find  ” . . . Mother’s clothesline, cold hands, theater lights/and over-garish sun/that came up an hour late today./The mail was late, the neighbors were late as well . . .”

“Its baby talons did not seem to penetrate

Its voice was already too loud for company

and she kept seed nearby just for this purpose.”

A rooster sits on mama’s lap, who is indifferent to the fact that:

The mother’s planning, the symbolism of the rooster in Portuguese heritage, and the detailed perspective all contribute to the surreal joy and gentle humor in the poem.

“. . . the eerie freight that whistled its way north,

shaking the very rails and spiked ties till

every dozer, every insomniac on either side

of the tracks acknowledged its right to

intrude, invade, and divide. And so the span

and the delve and the breathy walks

George Monteiro, one of the book’s editors, is originally from Rhode Island, born of parents from Continental Portugal.  In his fine poem, “The Blackstone,” he tells about:

These lines capture the challenge for the newcomer and the adaptation to “never-to-be familiar” countries.  The fierce train and its symbol of migration, the sleepless newcomer, and the eternal water flow across the collected memories of what Monteiro labels as ” . . .my dangerous/dominion, hard by the river that had/powered the mill and still, with/no further need to empower, ran/through channels . . .”. His strong imagery and attention to detail create a powerful vision of a particular time and place.

Another poet who has been a successful writer as well as a superlative workshop leader is Millicent Borges Accardi.  (In the spirit of full disclosure, Ms. Accardi and I are both members of a writing group in Los Angeles.)  She reflects on her family’s move from the East to California, a move that has been undertaken by many others in the Portuguese community:  “We moved away from the humidity,/And the church and scrimshaw/And the New Bedford Streets filled/With dust./To build a better life for you,/In the land of Disneyland not cranberries/Or lobster or whaling.”

“As you grow older, papa,

I long for a language that joins us,

beyond our last name,

the space between our front teeth,

But, the only Portuguese words

you ever gave me do not stand for love.

Another poem, “The Last Borges,” reflects some of the longing for connection with a parent, one that transcends the boundaries of nationality:
This remarkable poem places before the reader the rich heritage of Portugal, juxtaposed with the generational challenges that arise across time.

This excellent anthology is highly recommended as a starting point to appreciate the many fine writers whose works are included within its pages.  Perhaps the most encouraging point of the book is that many of the authors are still producing work even today, so that perhaps someday an additional volume of work by these same authors reflecting heritage, outsider status, and the pull of the ocean, will be available for the reader’s enjoyment.

The editors, Alice R. Clemente and George Monteiro, are currently Adjunct Professors in the Department of Portuguese and Brazilian Studies at Brown University.

Kathi Stafford is a contributor to the Portuguese American Journal. She is a member of the Westside Women’s Writer group. She has previously acted as poetry editor and senior editor for Southern California Review. Her poetry, interviews, and book reviews have appeared in literary journals such as Chiron Review, Nerve Cowboy, Connecticut River Review, SCR, and Hiram Poetry Review. Her poetry has been anthologized in Chopin and Cherries, as well as Sea of Change: Poems for Hitchcock.