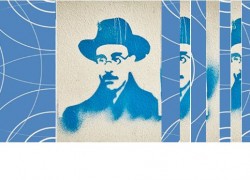 Balso specialty is in poetry and philosophy, and she currently teaches at the European Graduate School in Saas-Fee, Switzerland. The book developed from lectures she delivered on Pessoa at the College International de Philosophie in Paris, France.

Her study is a significant contribution to scholarship in Modernism, because it introduces Pessoa’s unique poetic philosophy, which is deeply paradoxical and unorthodox, to an English-speaking audience that may not be familiar with his metaphysical concerns.

Too often, similar to other Modernist poets such as W.B. Yeats, scholars interpret Pessoa’s philosophical interests as strictly occult or as mysticism.  However, as Balso shows, the renown Portuguese poet had serious interests in Western metaphysics.

Fernando Pessoa (1888-1935) is reputed for writing poetry and prose under the guise of various alter egos, also called heteronyms. His lyric poetry reads like it was written by an existential Walt Whitman — it’s personal, introspective, and confessional. Often the mask of his poetic persona is contradictory and illogical–it is sincerely insincere–as in these lines:

The poet is a faker
Who’s so good at his act
He even fakes the pain
Of pain he feels in fact.

And those who read his words
Will feel in what he wrote
Neither of the pains he has
But just the one they don’t.

The only reality for the poet is acting from the perspective of another personality, showing feelings that are universal, the pain that’s factual across human experience, but factless for the poet with all his entire senses alert, who uses words to elicit the feelings that could have been, and may be felt once again, if only imagined. For Pessoa, little else is more substantial than the imagos of dreams — produced by his so-called “dream machine” — which give materiality to the souls of inanimate objects in the world. 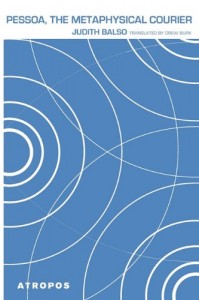 Adopting a procedure of “poetic carbon dating,” Balso cites the difficulty of attributing individual poems to a particular heteronym, because as she says, “We must not forget that from 1914 to 1930, the heteronymous work published by Pessoa was not done in an organized, collected manner, but in a scattered order, according to the demands, authorities, and conjunctures that appeared to him.”

Nonetheless, the birth of the heteronyms provided Pessoa encouragement to form in 1915 the literary magazine called Orfeu or Orpheus.  Although at the time he was intrigued with theosophy, he also engaged with serious philosophical interests, which motivated his anti-war avant-garde project entitled Ultimatum (published by Campos in 1917 in the literary journal Portugal Futurista).

His avant-garde enterprise was less futurist in tenor than a full-scale attack against the popular philosophy of Henri Bergson.  As Balso points out, Pessoa was quite a philosophical iconoclast, not unlike the Austrian philosopher Ludwig Wittgenstein, who argued against contemporary theoretical trends in philosophy.  Pessoa, as it turns out, lended futurism ammunition by creating his own version of the “ghost in the machine”–the non-objective abstract conjectures of fictional dream visions.

In the most significant sections of her study, Balso addresses Pessoa’s metaphysics of dream perception, his writing from the perspective of tédio, and the disquietude of inanimate objects within a “project of metaphysics without metaphysics.”  Much of her discussion focuses on the prose “factless biography” or “metaphysical ledger” of the semi-heteronym Bernardo Soares, entitled The Book of Disquiet.

As Balso says, “The Book of Disquiet is inhabited by a dreamer, sometimes a wanderer, almost always solitary, most often holed up in an office where he exercises his work as an accountant’s assistant, or pressed up against his window high up in his room under the rooftops in the lower neighborhoods of Lisbon.”

Soares’s dreams take a form other than consciousness — they are “in-between” states that apprehend things “in the mystery of their existence.”  He abstracts whatever is dreamable from objects or events in the world; the metaphysical category of “the real” is “non-dreamable,” an aspect of reverie that distinguishes an object’s “dreamable being from its opaque reality.”  As Balso reminds us, Soares thinks that “the being of things is also the true reality, in opposition to the reality of existence.”

In her discussion, Balso says that Soares’s “dream machine” reverie “presents itself as equal to reality to the extent that it springs forth from an identical exteriority as reality,” capable of “grasping our phantasmagorias” and the being of things.  In this way, Soares rejects traditional idealism in favor of realism, and concomitantly rejects Cartesian clear and distinct ideas.  Certainly, Soares’s explication is fragmented and obscure, especially as he assigns a soul to inanimate objects.

However, in opposition to idealist George Berkeley’s dictum To be is to be perceived, Soares avows a different motto: To be a thing is to be objectified by an attribution, which is to say, as Belso clarifies, “each thing possesses its own particular expression which comes from the outside, and the ‘environment’ (milieu ambiant) is the soul of things.”  Thus, we perceive things by our own tripartite perceptual axis: “a quantity of material, the way we interpret it, and the milieu where it is located.”

The highlight of Balso’s study is her analysis of tédio, which no other commentator has previously addressed.  This is the point at which Pessoa’s metaphysics is interpreted as being mystical.  Pessoa acknowledges that inanimate objects can resist reverie, thus, as Balso says, “the mystery of their existence thus invades the world and from this mystery oozes a horror without name…Everything is emptier than the void” and can be reduced to the chaos of non-existent things.”

Thus, tédio is akin to John-Paul Sartre’s nausea–it is a feeling of desolation without a precise location–an ennui of the entire soul.  It is the feeling of numb disquiet that pervades the metaphysical ledger of Pessoa’s thoughts: a physical response to the chaotic lassitude of objects making their impression on the senses.   This condition suspends one’s will, emotions, thoughts, even the ability to write, as the scribbler attempts to decide which persona of his must conceptually configure reality from the ephemera of impotent percepts.

Balso examines the desassossego of Pessoa’s dream wanderings.  In so doing, we learn that a tranquil life can gradually emerge from “Intranquility”– the “interior stirrings” that are consubstantial with ontological struggle in a world of mysterious objects.  Thereby, we abide Pessoa’s meandering consciousness, the unmoored metaphysics of reverie, unto a peacefulness attended by a lightness of being, quoth the unheard pitch of silence within us.