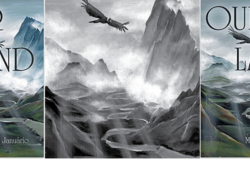 Andre is a rich landowner, while Mário is an immigrant college student. Although from different backgrounds, they both come to America to learn how to overcome economic underdevelopment in their own countries. Sadly, they discover that the American economic system perpetuates conditions of poverty for many while others become unreasonably rich, leaving behind a trail of environmental degradation.

It is Mário and Andre’s solid friendship that shows them the way forward. Through many twists and turns in several countries, their shared experiences teach them that underdevelopment can be overcome through a new economics of frugality (as opposed to the current economics of over consumption), that respects the economic rights of all our fellow earth citizens and the planet’s own sustainability.

“Entering the United States back in 1950s, as an international student from Atlantica, wasn’t easy, but for a young man who was a potential soldier for the colonial wars, leaving Portugal under António Salazar’s dictatorship, it was even harder.”(p.7)

“Eventually, a feeling of absolute quietness settled in his heart. He felt as if he were floating gently with the wind – and there was nothing around him as he peered down upon the distant face of the earth. What was a dream had become real.” (p. 8)

“When he felt alone, Mário had often tried to imagine how he could relate to God in a personal relationship. But thinking about Him as a person, that is a God who thinks, listens, and sees things as we do, always ended up making hm uncomfortable. It was like making God to his own image, and that was not very fair to God, he though.” (p. 11)

“Let me try to help you understand Mário’s hopeful mind-se at this time of transition in his life. He was not so much an immigrant looking for opportunity as a dreamer seeking to prepare himself for his life’s mission, which he envisioned as working for social justice on behalf of the poor who were still denied access to their rightful share of the earth by legal and illegal concentration of wealth and power among a few.” (p.30)

“In America, however, Mário found a world that was focused on short-material superficiality almost to the exclusion of anything else. He couldn’t identify with anything that could be described as an enduring inner core in this new culture. There was simply a relentless effort to achieve gratification without any concern for consequences or sustainability.” (p.50)

Manuel Januário is an American born in the Azores who earned his Master’s Degree in Adult and Continuing Education from Washington State University USA. His vast and rich experience includes being the Executive Director of the Community Action Council of Spokane County, Washington State, as well as the director of the Employment Development Consortium of five Native American tribal governments. He is a lifelong long advocate for social justice and equity and currently lives in a rural community with his wife.