Book: ‘Operation Alacrity’ The Azores and the War in the Atlantic – Editor’s Note 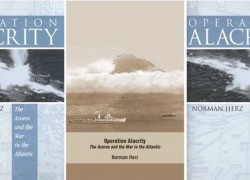 To win the war against German U-boats, the Allies had to protect their convoys in the vast black hole of the mid-Atlantic known as the Azores Gap. In 1943 they devised a plan to set up air bases on the Azores Islands, owned by neutral Portugal. It was essential for the operation to remain secret because the Allies had to get there before the Germans, who had their own plan to build bases. Author Norman Herz took part in the Allied operation as a corporal with the U.S. Army Corps of Engineers’ 928th Engineer Aviation Regiment. At the time he was given little information about the operation and told never to talk about what he did. After the war, Operation Alacrity remained mostly unknown, kept secret, Herz suggests, so the U.S. government would not be embarrassed–they had claimed they would not invade the Portuguese territory. In researching the book, Herz found not a word of the operation mentioned in any official U.S. history of World War II but a treasure trove of declassified memos and others documents from the files of the U.S. Joint Chiefs of Staff and the Combined U.S. U.K. Chiefs of Staff and in state department files. The story is filled with diplomatic intrigue and double-dealing, including secret meetings between Franklin Roosevelt and Winston Churchill and Churchill’s use of a 1373 treaty with Portugal to justly landing in the Azores. The story also involves all of the Allied engineering branches, from U.S. Navy Seabees to RAF Sappers. The success of their operation is undeniable. U-boats stopped patrolling the Azores Gap and not a single Allied troopship was lost again in the area. Today the base is an important link to American and NATO defense worldwide.

Norman Herz is professor emeritus of geology at the University of Georgia and well known for his scientific contributions to archaeology. After service in World War II, he was commissioned as a 2nd lieutenant and served in Air Force intelligence.