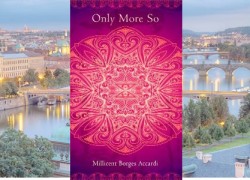 Only More So is a collection of lyric poems. Sometimes a bridge in a sad song, other times an echo that threatens to develop then fades, the images blend, twist, and entangle one another: a marriage is a song, then it’s a body, and finally a boat blind in the sea listening for the fog horn.

We find ourselves alone in the spaces where atrocity meets the marriage bed-in those silences that are chosen, those that are forced, those that must be, and those that kill. “In Prague” is as close to a pure definition of poetry as we get, where memory is kinetic action, where language is recorded in the land itself, where the names of things tell us what they really are:

(Author of The Secret Correspondence of Loon & Fiasco, It’s Best
Not to Interrupt Her Experiments and A School for Fisherman)

Millicent Borges Accardi, a Portuguese-American poet, is the author of five books: Injuring Eternity (World Nouveau), Woman on a Shaky Bridge (Finishing Line Press chapbook), Practical Love Poems (2015), and Only More So (Salmon Press, Ireland). She has won fellowships from the National Endowment for the arts (NEA), Fulbright Foundation, the California Arts Council, Barbara Deming Foundation, CantoMundo, and Formby at the Special Collections Library at Texas Tech. Past artist residencies include Yaddo, Jentel, Vermont Studio, Fundación Valparaíso in Mojacar, Milkwood in Cesky Krumlov and Disquiet in Lisbon, Portugal. Recently she has been a visiting poet at The Muse Writers Center in Norfolk, VA and “The Gathering” at Keystone College in PA. Follow her on Twitter @TopangaHippie, Wikipedia and her own web page. Accardi’s poetry has appeared in Nimrod, Tampa Review, New Letters and Wallace Stevens Journal as well as in Boomer Girls (Iowa Press) and Chopin with Cherries (Moonrise Press) anthologies. Her interviews, theater and book reviews can be found in print and online. She is a regular contributor to the Portuguese American Journal. She received degrees in English, literature and writing from USC and CSULB and works as a freelance writer.