Book: ‘My House is a Mansion’ by Irene Marques – Editor’s Note 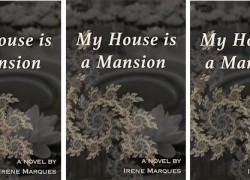 ‘My House is a Mansion’ is a spiritual and sexual coming of age tale, which explores issues of personal and collective identity, mythical and mystical understandings of self, world and universe, gender, race and class. Amélia, the protagonist, embarks on a quest of self-discovery, travelling between continents in real and symbolic terms finding personal growth and enlightened awakening in the process. Marques’ Comparative Literature background, her transcultural references, poetic lyrical prose, ecstatic visions, and profound philosophical investigations on what it means to be a woman (and a person) create an emotionally powerful journey of self-exploration. Author Carlo Matos describes Marques’ forthcoming book as a “daring, poetic novel ‘in different tongues.’” Professor Irene Maria F. Blayer describes it as “a moving portrayal of life… packed with insights that transcend time and space.” Marques’ The Circular Incantation: An Exercise in Loss and Findings was published by Guernica Editions in 2013. The poetry collection reveals an incantation that is “multifaceted and complex” and in which “the intimate personal, the familial and the local appear effortlessly intertwined with the collective socio-political, the mystical, the mythical, the religious, the ecological, the tribal and the cosmic.”
Her other works include The Perfect Unravelling of the Spirit and Wearing Glasses of Water.

Irene Marques is a bilingual writer writing in English and Portuguese and an academic, holding a PhD in

Comparative Literature, and a Masters in both Comparative Literature and French Literature, all from the University of Toronto, as well as a Bachelor of Social Work from Ryerson University. She currently teaches in the African Studies Program at the University of Toronto and the Department of Languages, Literatures and Linguistics at York University. In the past she has taught at the Ontario College of Art and Design University and Ryerson University and also worked at the Centre for Addiction and Mental Health. She is the author of three poetry collections, as well as the Portuguese language short story collection Habitando na Metáfora do Tempo: Crónicas Desejadas. Her most recent works include the novels My House is a Mansion and Uma Casa no Mundo, as well as a collection of short stories titled Procurando Maravilhas. Her academic publications include the manuscripts Transnational Discourses on Class, Gender and Cultural Identity and Critical Approaches: The Works of Chin Ce, Volume 1 (Editor) and numerous articles in international scholarly journals.