Book: ‘Madeira – The Islands and Their Wines’ – Editor’s Note 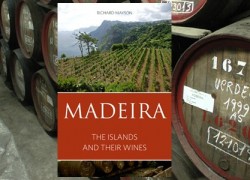 They say that a fine wine gets better with age and of no wine is this more true than it is for madeira. Not only does madeira require cask-ageing in order to acquire its unique ‘madeirised’ taste but, unlike most other wines, it retains that taste for many years, even several centuries. For heat and air, the sworn enemies of most wines and winemakers, conspire to turn Madeira into one of the most enthralling of the world’s wines as well as the most resilient. Madeira wines from the nineteenth and even the eighteenth centuries still retain an ethereal, youthful gloss. Once the cork is removed, the wine comes to no harm, even if the bottle is left open and on ullage for months on end. If ever there was a wine to take to a desert island this is it.

Award-winning wine writer Richard Mayson, the author of Madeira: the islands and their wines (published on 22 May 2015), has been exploring the world of madeira for twenty-five years and describes it as ‘one of the world’s most mystical and miraculous wines’. Madeira is indeed a much-loved fortified wine with a history that is as deeply embedded in American as European culture (for instance, did you know that it was George Washington’s favorite drink and used to toast the American Independence in 1776?) and it’s currently making a comeback. In this timeless book on an ageless wine Mayson takes the reader on a thrilling journey through the rich and turbulent history of the islands of Madeira, from its discovery by the Moors in the fourteenth century to the present day and its draw as a popular tourist destination.

Mayson describes the physical character of the archipelago, the state of the vines and vineyards and the way in which the wines are made. A guide to current producers follows along with a detailed appraisal of their range of wines. There is also a chapter for collectors of older wines, many from shippers that no longer exist but whose names live on in bottles of wine that are still found in cellars all over the world. Wines dating as far back as the eighteenth century are featured in the book, along with quality appraisals. There is a short section on the language of tasting madeira as well as information on buying, keeping and serving the wines. The book closes with a travel guide for anyone visiting the islands.

This unique book on the island and its wines explains what it is that makes Madeira so special.

Richard Mayson is an expert on port and Portuguese wines. He is the author of Port and the Douro and Richard Mayson’s guide to vintage port as well as of Portugal’s Wine and Winemakers and The Wines and Vineyards of Portugal and is a regular contributor to the Oxford Companion to Wine and Larousse Encyclopedia of Wine as well as to Decanter and Wine International. In 2014 Richard won the Louis Roederer award for International Wine Feature Writer of the Year.