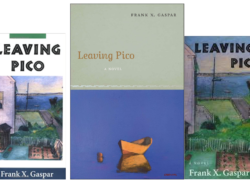 This new 3rd edition of Leaving Pico makes Frank X. Gaspar’s award-winning coming-of-age novel accessible to a new generation the insular Portuguese fishing community of Provincetown (MA), where Josie Carvalho’s life has been shaped by the annual influx of summer tourists and his great aunt’s fervent, if idiosyncratic, Catholicism. The counterweight to these forces has always been Josie’s relationship with his grandfather John Joseph, a drunk, clam-poaching old man who is nevertheless a sly and masterful storyteller.

After a stranger starts dating Josie’s mother and upsets the family’s equilibrium, John Joseph heals the rift with the colorful and adventurous stories of their ancestor, Francisco Carvalho, a Portuguese explorer who just may have beaten Columbus to the New World. With the guidance of these obscure but inspired tales, Josie begins to find new ways of understanding his family and the outside world. This new edition of Leaving Pico makes Frank X. Gaspar’s award-winning coming-of-age novel accessible to a new generation of readers.

“With them came the taint smell of incense and votive candles, and I knew that my aunt had covered her bureau-top. Now she walked with the gravity of the Pope himself, ready to give John Joseph her considered answer. My great aunt’s full name was Theophila de Jesus Carvalho Dunne, but she was mostly called Hettie, The American name that she had taken as part of her fierce drive to get all that she could from the New World. She had come here from the Azores with her brother, to assimilate and become respectable. – Leaving Pico | Excerpt

Frank X. Gaspar was born and raised in Provincetown, Massachusetts. The author of five collections of poetry and two novels, Leaving Pico was a Barnes and Noble Discovery Prize winner, a recipient of the California Book Award for First Fiction, and a New York Times Notable Book. 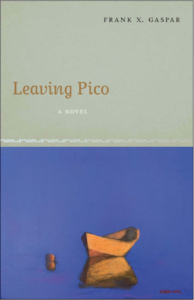