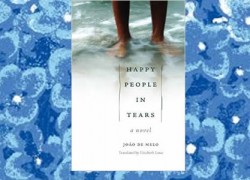 Happy People in Tears is an award-winning tale of diaspora that takes the reader on a voyage through five worlds—the island home of São Miguel, mainland Portugal, California, New England, and Canada—experienced and suffered through the obsessive search for happiness of a poor Azorean family of nine. It is a polyphonic novel, in which the voices of three of seven siblings narrate their versions of the family saga in alternating chapters, culminating in a dialogue between the key narrator, Nuno Miguel, and his estranged wife, Marta, who tells the story from her point of view and sheds a harsh light on her husband, the poet, and his chronically tearful family. Nuno Miguel completes the circle of migration and suffering in the final chapter to return to his ancestral home, to greater self-awareness and a place of acceptance.

It is a timely book that addresses the loss of the familiar, family separation and alienation, the anxiety of displacement, and alterity in an increasingly complex and interdependent world. The book also offers a fascinating vision of Portugal during the time of the Salazar dictatorship and its colonial wars in Africa, when the political collusion of church and state fomented a patriarchal society that became mirrored in the violence of the family ruled by an abusive father.

About the Author
João de Melo was born in the Azores in 1949. He has written over 20 books, including the novels My World Is Not of This Kingdom and, most recently, Lugar Caído no Crepúsculo. First published in 1988, Happy People in Tears won multiple literary awards in Portugal including the Grande Prémio de Romance e Novela, da Associação Portuguesa de Escritores, and the Prémio Fernando Namora. Several of his novels are inspired on his experiences in the war in Angola where he served for 27 months.

About the Translator
Elizabeth Lowe is professor and director of the Center for Translation Studies at the University of Illinois, Urbana-Champaign. Dr. Lowe specializes in literary translation, translation pedagogy, translation theory and terminology. She received her undergraduate education from Barnard College, earned an M.A. in Romance Languages from Queens College of New York, and a Ph.D. in Comparative Literature with a concentration in Translation from the City University of New York. She was a Fulbright Scholar in Colombia and has taught and lectured extensively at universities in Latin America and Europe. ATA certified for Portuguese to English translation, she is a member of the ATA Committee on Standards, and an active member of PEN and the American Literary Translators Association.

João de Melo will officially launch the book on Friday, May 1, from 5:30pm-8:30pm,at the Portuguese Consulate of New Bedford, located at 628 Pleasant Street in New Bedford. The event is co-sponsored by Tagus Press, the publishing arm of the Center for Portuguese Studies and Culture at the University of Massachusetts Dartmouth.

The book launchings and signings are free and open to the public. Contact information: Mario Pereira, Managing Editor of Tagus Press at mpereira6@umassd.edu or by calling 508-999-8255.