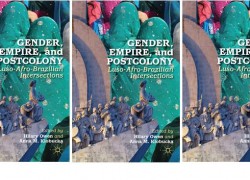 Gender, Empire, and Postcolony: Luso-Afro-Brazilian Intersections is a collection of essays on gender in Portuguese colonialism and Lusophone postcolonialism. The contributors engage systematically with postcolonial and gender theory as they examine the diverse universe of cultural production that has directed itself to Lusophone colonial and postcolonial experience and legacy, including literature, cinema, and other visual arts. The volume builds on existing critiques of Lusotropicalism while affording important new space for Lusophone dialogue with mainstream postcolonial theory. Beyond its core audience of Luso-Afro-Brazilian studies specialists, Gender, Empire, and Postcolony will interest scholars and students of colonial history and postcolonial theory; African and Latin American studies; and film studies and art history.

Hilary Owen is Professor of Portuguese and Luso-African Studies at the University of Manchester, UK. She is the author or editor of several books, including Mother Africa, Father Marx: Women’s Writing of Mozambique, 1948-2002, and (with Phillip Rothwell) Sexual/Textual Empires: Gender and Marginality in Lusophone African Literature.

Anna M. Klobucka is Professor of Portuguese and Women’s and Gender Studies at the University of Massachusetts Dartmouth, USA. She is the author or editor of several books, including The Portuguese Nun: Formation of a National Myth (2000) and (with Mark Sabine) Embodying Pessoa: Corporeality, Gender, Sexuality (2007).