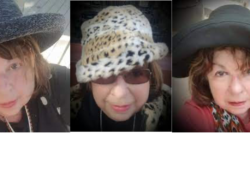 Gularte’s identification with herself through the natural world and through the lives of others with whom she feels more than just symbolic empathy, provides us with something unique to the usual landscape that poetry’s created in our late 20th and early 21st century: passion. Engaged to the particular, Gularte brings us closer to a world we all rarely have time to visit and she accomplishes this not with elaborate description or pretention of any kind, but with an immediacy that reveals something heretofore unseen or unheard. You don’t stand still in these poems nor does their steady pace hurry you in any way. Each word matters and, without getting in their way, they allow us the opportunity to experience what we never knew was there.

Plant, wildlife and human converge into one unified voice of nature and spirituality in Lara Gularte’s Fourth World Woman. The poet easily travels between dimensions and species, as ancestors drift through the pages. She manages to write from several layers at once, combing the depths of imagination while describing sensitive emotions involved in a mastectomy. “She waits for the test to come back negative/while death leans into the side of the house…. Her face at the open pane, half here and half there-/where her mother ghosts among the trees”. Readers will find themselves entranced and unable to resist following Gularte to glimpse heaven and the afterlife when, the moon throws a rope down for her to climb.

Lara Gularte’s Fourth World Woman is both a wild read and a surrealistic delight. Inhabited by creatures from the natural and geophysical worlds-doves, a giant fish shape, wolves, even the moon and clouds-the poems surprise with some deft shape-shifting: a dead dove comes alive, a “brown bear bellows/from the voice of an old woman,” and clouds are transformed into “a sky of old shoes.” But there’s a purpose to the flash and sleight of hand. Whether the startling poetic landscape is navigated by an unnamed “she” or by a first-person narrator, Gularte takes on issues like border crossings, family separation, the pandemic, the 2018 Camp Fire in California, and, ultimately, mortality. As she writes in “Leaves,” “the distance between now/and my future shortens . . .” The most personal poems in this collection-“The Close Sky,” “Transcending My Daylight Body,” and “Beauty”-are probably the strongest. You will be deeply moved by this book.

Lara Gularte lives and writes in the Sierra Foothills of California, and she is El Dorado County Poet Laureate 2021-2023. Her book of poetry, Kissing the Bee, was published by The Bitter Oleander Press, in 2018. Nominated for several Pushcart Prizes, Gularte has been published in national and international journals and anthologies. Her poetry depicting her Azorean heritage is included in the The Gávea-Brown Book of Portuguese-American Poetry.

Lara Gularte: Her sense of identity is rooted in the middle of the ocean – Interview