Book: ‘Economies of Relation in the Lusophone World’ – Editor’s Note 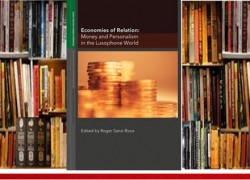 Tagus Press at UMass Dartmouth, in partnership with the University Press of New England (UPNE), launched the publication of  Economies of Relation: Money and Personalism in the Lusophone World, guest edited by Roger Sansi under the general editorship of Victor K. Mendes. This double-volume issue of Portuguese Literary & Cultural Studies (vols. 23-24) examines the representations of money in Brazil and throughout the Lusophone world.

“Money does not bring happiness.” For Roberto Da Matta, in Carnivals, Rogues, and Heroes (1979), this saying embodies the ambivalence surrounding money in Brazil, a legacy of a Lusophone cultural tradition that privileges personal relationships over impersonal commodified exchange. This volume of Portuguese Literary & Cultural Studies questions this tradition from the perspective of different disciplines. Does money stand in contrast to personal relations? And, if so, is this really particular to Lusophone or, more widely, Latin cultures—as opposed to, say, Anglo-American cultures or Protestantism generally? This book will be of interest to scholars in anthropology, history, literary criticism and Luso-Brazilian studies.

Roger Sansi holds a Ph.D. in anthropology from the University of Chicago and is a senior lecturer at Goldsmiths, University of London. He is the author of Fetishes and Monuments: Afro-Brazilian Art and Culture in the 20th Century (2007).

Victor K. Mendes is associate professor of Portuguese and graduate program director in Luso-Afro-Brazilian Studies and Theory at UMass Dartmouth.