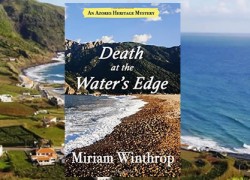 Anton and Catarina Cardosa have just realized their dreams. The President of the Azores has approved their proposal to help preserve their unique culture, and they have moved their family to Santa Maria to transform a derelict property into a rural hotel, Casa do Mar. But the first murder on the island in living memory threatens to turn their dreams into nightmares. With the welfare of hundreds of people in mind, Lori Moore has just done something that takes her from the peak of her career to the possibility of not even finding an entry-level position. She comes to the Azores for one last vacation before resigning herself to an unappealing future, and there she finds a place and people she cares about. She joins forces with Anton and Catarina to safeguard their heritage and make a success of Casa do Mar.

Each book of the Azores Heritage Mysteries is set on a different island in the picturesque archipelago, and features a recurring cast of endearing local characters and visitors. As mysteries are solved, the tension between tradition and progress is explored. Death at the Water’s Edge — book 1 of the Azores Heritage Mysteries series — offers a glimpse into the history, culture, and people of Santa Maria.

Miriam Winthrop is a molecular biologist by training and the author of Saudade, her debut novel inspired by the pursuit for her long lost Portuguese heritage. Winthrop attended the United Nations School. After traveling the world with her family, she studied at Smith College where she received a B.A. in molecular biology. She continued her studies at Georgetown University where she taught a combination of courses, including molecular genetics, creative writing and forensic science. She has since developed a special interest in human genomics and in the intersection of ethics and genetic technology, on which she has written extensively. Born on the East Coast, Winthrop has settled in central California where she now lives.