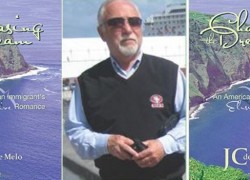 Ben and Silvio are best friends from a remote island in the Azores with big dreams of coming to America. They each marry an American woman in order to emigrate. Margaret and Charlotte, niece and aunt, offer the young men a home, and they establish a loving extended family. Ben and Silvio’s lives in California, that land of milk and honey, are entwined through both family and business connections. Yet even as they make their fortunes, a rift grows between them. Driven apart by ambition, jealousy, and accusations of betrayal, both men lose their careers, the women they love, and their trust in each other. When Ben returns to California, he finds Silvio a changed man. Both men are older, and perhaps wiser. Can they overcome the past, make their peace, and find happiness and love in the future?

John Carlos de Melo was born in San Miguel, Azores, Portugal. At age twenty-five, after marrying his high school sweetheart, he came to America and settled in the San Francisco Bay Area, where he has lived since September, 1966. After a thirty-four year banking career and then twelve years as a management consultant, John, since the end of 2011, has found immense joy in writing projects. Simple Wonders, a book of memoirs and a short narrative of John’s year 2011, became his first test. Chasing the Dream, an intriguing fictional novel about very serious human matters, thus becomes his second and more challenging writing undertaking. Married for over forty-seven years, father of three sons and grandfather of seven grandchildren, John values the importance of family and human relationships. Totally integrated in America from the day he arrived, he still maintains ties with friends he left in his birthplace.