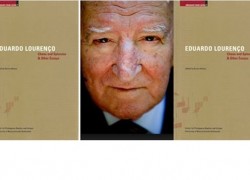 Although he is a prominent Portuguese cultural critic and a leading intellectual, Eduardo Lourenço is not widely known in the Anglo-American world.  Several of Lourenço’s essays on cultural and philosophical topics have been collected in Chaos and Splendor & Other Essays (2002), edited by Carlos Veloso (Center for Portuguese Studies and Culture, University of Massachusetts Dartmouth).  It is a handsomely printed book of less than 200 pages with a gold and red fringed cover.

Lourenço was born on May 23, 1923, in São Pedro de Rio Seco.  In 1946, he earned a degree in Historical and Philosophical Sciences at the University of Coimbra, where he was an assistant professor. He  has taught at various universities and has served as the cultural counselor at the Portuguese Embassy in Rome.  He has won prestigious academic and cultural awards: the Pessoa Prize, the Medal of Cultural Merit from the Ministry of Culture, and he is a Knight of the Legion of Honor of France.  He has been awarded honorary doctoral degrees from several universities, including the New University of Lisbon.

Early in his career, he studied the luminaries of Continental philosophy: Hegel, Husserl, Kierkegaard, Nietzsche, and Sartre.  In a similar vein, he was much influenced by existentialist literature: Dostoevsky, Kafka, and Camus.  Thus, like many of the writers that mentored him, he developed into a leftist cultural critic and much of his writing feels like a gloss on Husserl’s The Crisis of the European Sciences, a critique of Western philosophy and science, particularly the dominance of empiricism, scientific materialism, and naturalism.

The leading essay in Chaos and Splendor & Other Essays, from which the title of the collection comes, defines the terms of Lourenço’s cultural critique and previews his interests in the Portuguese writer Fernando Pessoa.  Therein, Lourenço addresses the symptoms of intellectual and spiritual “chaos” endemic in Western civilization, the dyadic Judeo-Christian democratization of culture through American corporate values, and the iconic influence of Walt Disney’s Mickey Mouse. 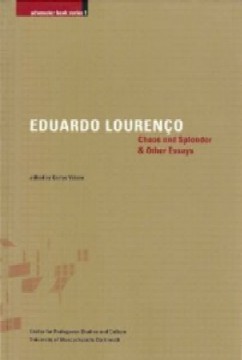 According to Lourenço, “Americanization” is a chaotic symptom of contemporary culture which has uncentered Europe from Western civilization, causing the banalization of cultural vocabulary.  Of course, we’ve heard this tune before from polemical intellectuals: de Tocqueville, Baudrillard, Debord, Hitchens, Levy, and most recently, Eagleton; thus Lourenço intones the operatic cause célèbre of the choir, critiquing the decadence of low-art, simulacra, and popular culture, the “American Saturn probe,” he calls it, of American films such as Conan the Barbarian and Star Trek.

Lourenço doesn’t write with analytic clarity but rather in the opaque style of Heidegger,  Nietzsche, and Derrida.   This is likely a significant reason why his essays have not developed an Anglo-American audience.  He’s interested in the genealogy of concepts, rather than the definition or categorization of them.  For example, rather than defining ‘chaos’ in certain terms Lourenço evokes the abstract denotation as “the idea not only of confusion and the disorder of the elements, but also of a kind of incapacity of the spirit to comprehend and, much less, to dominate, a state of affairs, of the world, of society, of history, where one does not glimpse even the shadow of order.”

The nearest Lourenço comes to defining chaos is the statement that it is “a moment that is at the same time one of the exhaustion of that which exists and one of regeneration,” which leads him to Nietzsche’s idea of eternal return.  Later on, he mentions Lenin, the Russian revolutionary, and Feyerabend, the contentious philosopher of science, as co-prophets of hegemonic scientific law and practice, proffering strategies that failed against the “nothingness” of primordial chaos.  Lourenço concludes the essay with a kind of literary coda:

We are the orphans of the splendor of that virtual existence that it is illogical to call chaotic-ness except for its effects, precisely because it is the offspring of the maximum amount of order that we can integrate into a system that tends to be self-referential.  Those creatures that the insiders will scornfully consider to be “human” are the only ones that are going to exist outside the world.  Even when it was ephemeral, the spectacle of loss and absence of some sort of order in the world brought about humanity’s inability to discern its own image, resulting instead in the most gloomy perspective on life: that which all of the Dantes, known and unknown, described in the form of an infernal topology.  We incorporated hell into the daily life of the most fascinating and atrocious of centuries.

Thus, we can infer that chaos and disorder are symptoms of the political body with its corporate-driven media spectacles and, as Lourenço says, the splendor of invisible horrors and virtual reality.  Perhaps there are no better examples of chaos than the amorphous metropolis, the incongruity of waking days, or the daydreams of cubicled lives.

In the American literary tradition, no writer identifies as wholly with the en masse, the body politic, as Walt Whitman, so it’s interesting that Lourenço mentions him as having a similar “heteronymic scheme” as Pessoa.  As it turns out, Pessoa owned a copy of Leaves of Grass, which he annotated, and Lourenço avows that the poet’s heteronyms Alberto Caeiro and Alvaro de Campos were “sons” of Whitman because of their relations with the body politic, the “sensorial and sensual appropriation of the exterior world.”

Lourenço finds that Whitman’s preoccupation with the ecstatic functions of his own body and the corporeal allusions of de Campos form a consubstantial dialectic, the romantic filiation of spirit in the mysticism of the mutilated body, yet it unravels at the seam of their sado-masochistic pathology, as Whitman’s narcissism counters Pessoa’s in Caeiro’s intense guilt.  As Lourenço analyzes this dialectic, he is on firmer ground, convincingly arguing that “Alvaro de Campos is anti-Whitman, as Caeiro is a non-Whitman,” such that “Both cases are …intelligible as the double and inverse form which was that of their creator Pessoa–that of being Whitman while continuing to be Pessoa or of being Pessoa in spite of being Whitman.”

Thus, Pessoa’s encounter with Whitman gives him “the ideal material to carry to an extreme refinement that which, without doubt, he could not have become aware of without Whitman.”  Such an encounter, then, transforms him as a thinker.  As Lourenço says, Pessoa metamorphosized himself “with his breadth and black splendor, into one of the supreme poets of Absence in the modern world.”

Pessoa’s encounter with Whitman also brings him in dialogue with Nietzsche’s ideas on the formless chaos of European nihilism, about which Lourenço offers intelligent discussion, as when he says that Pessoa’s grappling with the negation of life is a form of Nietzsche’s will to life.  However, as he points out, Pessoa’s will to life isn’t indebted to Nietzsche’s genealogy rooted in Schopenhauer’s pessimism, but rather recognizes the absurdity of existence because reality is “beyond the world,” the real world, the virtuality of ressentiment denigrating life into relations of pity and compassion in the face of chaos, motivating our cries for a return of the gods to splice primitive myths with the mirror of truth.