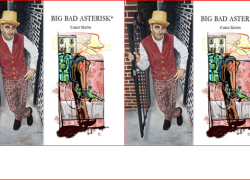 The asterisk is one of the most neglected symbols in the history of typography.  What is an asterisk?  What does it signify?  What role does it play in our writing?  If there were a Saint Asterisk would she be a faint footnote in the Lives of Saints?  These are among the unsung questions of our lettered lives.

An asterisk is a seven-fingered star that glitters on the ink-blotted page.  It designates an explanatory footnote, an omission, or a correction.  Often the asterisk performs a judicial sidebar of sorts, introducing information that doesn’t quite fit into the flow of discourse.  Occasionally, it can be ironic, cheeky, or paradoxical.

What is this sign that calls attention to itself?  “Look at me!” it seems to say, “Pay attention to me, only me, I’m no parentheses!”  The asterisk is, among other things, a jealous lover, a strumpet, a femme fatale.  We attend to it with our eyes, but really that’s never quite enough, because we’re called upon to follow wherever it leads.  The asterisk impishly tugs at our arm, beseeching us to step inside its mysterious dwelling, unto its seduction, its soft embellishments, redirecting our focus, down a rabbit hole perhaps, from a line of thought.  It whispers, “I shall lead you on a detour.  Relinquish your devotion to linear thought, for waylaid is the path of parataxis.”

I am a wind that blows and whistles through the cane fields—that beats against the door and lets disaster in, never for it to leave again; am like the river that runs from the mountains to the sea which—losing heart—loses its way; am like the unquiet ocean, which beats against the shore like the wild dog who never tires of running. I am the salt in my sea, the ash of my land, a soldier without a battle, a soldier short a war.*

In his Breakfast of Champions, Kurt Vonnegut remarks the asterisk’s resemblance to the look of an asshole.  In that case, the asterisk really could lead us unto dark corridors.

All this makes us speculate, then, about where Carlo Matos’s Big Bad Asterisk might lead us.  Matos, a college English professor by day and a cage fighter by night, has published two previous collections of poetry: A School for Fisherman (BrickHouse Books) and Counting Sheep Till Doomsday (Blaze VOX Books).  With Big Bad Asterisk, he offers us a thinking man’s sardonic view of the world.  Never was Email depicted as fervently the harbinger of Western civilization’s decline, and never have shoes been such a fascinating subject in poetry since the black shoe of Sylvia Plath’s “Daddy.”

Something comes knocking in the Big Bad Asterisk, and if it’s not a bag of bones thudding against the closed door of the Dr. Jekyll and Mr. Hyde personas we meet in this prose poem novella, then it’s an asterisk interrupting a stream of thought with announcements of trivia from a TV game show.  Or it is the disturbing tattle of a goat sodomite, whose opinions hardly matter, and could very well be blotted out.  Of course, that’s the point.

In Matos’s boy meets girl narrative, the trajectory of a couple’s relationship resembles clanging atoms in the ether, merely inconsequential footnotes, asterisked data, or the detritus of uninspired labors, such as

She loves Yetis. They hate time machines nearly as much as she does, have no interest in loops, meeting themselves, or catastrophic butterfly flaps. They don’t care much for looking back at all. And forward, forward is just a hairy step in the snow out of the weather and into each other’s laps or on the trail looking for a tasty meal. They are terrific hunters—not many people know this. And they have—ironically—a highly overdeveloped sense of time. Have you ever met a Yeti who was late?… or who didn’t show up when he said he was going to? They are always five minutes early and never make you wait, sweating those ten, fifteen, sometimes twenty minutes out in the cold wondering why you don’t matter.*

*Several studies in the 1970s concluded that Yeti timeliness had decreased, but many contemporary researchers question the data-gathering methods and find the conclusions dubious. See, for example, Bob Dixon-Kolar’s Philosophical Ideas and Artistic Pursuits in the Traditions of the Himalayan Yeti.

receiving Email or overhearing gossip.  In that case, the “rag and bone shop” of the heart, as W.B. Yeats called a lack of imagination, points to the banality of desolate souls.  It’s a short distance to conclude that any of our actions or utterances can be asterisked ad nauseam, such that we can empathize with the paralyzed Hamlet, weeping Ophelia, or the Hollow Man.  However, the neurotic in each of us tends to be impatient for the next bit of trivia: to witness where it leads and whence it came.

Matos’s personas remind us that nameless anonymity characterizes the Everyman nihilism that’s so pervasive in our collective cultural relativism.  Truth is analogous to discarded Kleenex crowding the trash bin consciousness of our phlegmy mucous membranes.  “In every bathroom,” a nameless man observes, “those little plastic canisters that passed for trashcans were overflowing with used Kleenex….the world did not need another metaphor.  What was needed here was cold observation if such a thing was still possible: the facts and then some viable conclusions if they could be drawn.”  But metaphysical (or pataphysical) answers aren’t forthcoming, nor are they sincerely queried.

Holding the fish lovingly to his pursed lips, he blew into its mouth, whispering something delicate in his baroque Portuguese . . . and it inflated. It puffed up and stayed puffed . . . a little dirigible. It must be some kind of blowfish, they simultaneously realized. He cast it into the water where it skimmed about on the surface like a tiny speedboat waiting to exhale, desperate for the tide to return to a sterner deep.*

In fact, the possibility of conclusive inference is asterisked, whereby an eponymous source informs us that “Discoveries were made, then later lost, forgotten.  Some things came to light, while others disappeared, certain beliefs becoming accepted as fact, some as legend.”  The security of one’s convictions is trivial and passively held.  The difference between fact, fiction, and fantasy is negligible.  Seeing is believing; and believing is seeing the marginally tolerable.

The pursuit of definitive truth in our relationships is an asterisked Sherlock Holmes adventure.  We’re all a bit like Holmes’s sidekick Dr. Watson—the opacity of fact-finding leads to consternation and the footfalls of aching bunions.  A persona’s neurotic misery over distorted memories is an unheeded metaphor for how screwy our relationships are or can become.  For him, the nature of romantic connections is as inscrutable as the directions for IKEA furniture, or the logical procedures of a famous English detective.  He ponders whether “It was better to be Watson, better to have the shoe on the other foot.  The question was almost always better than the answer.* [*What is IKEA?]”

It goes like this: a little boy falls in love with a pair of monkey pajamas. He would wear no others . . . one of those impossible eccentricities that children specialize in and parents despair over. Parents never seem to understand that it only ever happens in those pajamas . . . the door would close and off he’d go high on a bamboo pole or swinging vine to vine in a jungle where all the dangers are real but have soft edges or are painted bright colors—or are comically huge, or reliably tiny. With each passing night, it becomes increasingly impossible to squeeze the little boy into the monkey pjs: the arms long cut off, the legs worn through, the neck stretched and misshapen. One morning, they wake to an empty room for if it was difficult getting in, it was even more difficult getting out—and they hadn’t thought of that.*

*All they could say of history is that doorknobs used to be mounted higher, of the time before doorknobs, nothing.

This statement makes us ponder the indomitable Swedish conglomerate, and yet it also reports on the exit polls of any philosophy class.  It is Hamlet’s stoical conclusion to be inconclusive, which inspired John Keats’s Negative Capability.  That is, if heaven’s colors are majestically painted, then it’s rather pointless to unweave the rainbow in search of Truth.

Matos’s asterisked world contains donkeys, size nine-and-a-half women’s shoes, licentious goats, and the reverberating echoes of Nautilus-shell genomes.  There are cage fighters, ex-boyfriends with giant penises, and a Yeti-loving heroine.  Eddie Vedder, who often appeared in live concerts as a Yeti, and Chuck Norris make cameo appearances.  It’s an absurd world in which no one wants to voluntarily donate their organs.

The novella is organized into sections, referring to the self-referential detours of the two characters: “He,” “She,” “It,” “They,” “You,” “We,” and “I.”  Inasmuch as Matos describes a world of digressive parataxsis, he also shows us his lively Azorean roots in Sao Miguel, with its backyards smooth as a priest’s tonsure, populated by families who fish for a living, sip kale soup, and own a mysteriously disappearing goldfish named Salazar.

For Matos, the asterisk is a conveyor belt of fluid dynamics.  His voice trembles with the Doppler Effect of personas that relate to us over a vast span of temporal geographies.  In the background of digressive echoes is the light-hearted imaginings of a working class latch-key kid from a Portuguese immigrant family.  His poetic narrative is no Junot Diaz-style Bildungsroman; rather, it is a dialogic juggernaut of multiple intelligences, an asterisk map of a young boy’s monkey pajamas, leading home.

(*) Michael Colson earned a doctoral degree in English at the University of Southern California.  He teaches English and Philosophy at Porterville College and lives in Visalia, CA with his redwoods and koi fish.  He is working on two book projects: a study of Yeats and Wittgenstein, and a novel about his mother.