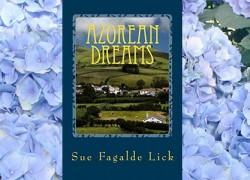 A Portuguese-American romance: Newspaper reporter Chelsea Faust spends most of her spare time in the darkroom and runs marathons for fun. She’s working for a small weekly newspaper now, but she has big ambitions.

At 28, she lives alone and lets no one tell her what to do, much to the chagrin of her Portuguese-American mother and her German-American father.

Enter Simão Freitas, an immigrant from the Azores Islands who brings with him old-country views about how men should be in charge and women should obey their husbands.

When they meet at a Portuguese festival, the attraction is instant, but any chance of a future together appears to be doomed as Simão battles memories of a painful loss while Chelsea pursues a news story headlong into a situation that could cost her life.

Sue Fagalde Lick, a former newspaper editor, has published countless freelance articles, short stories and poems, plus a writers’ guide called Freelancing for Newspapers and three books on Portuguese Americans. In addition to Azorean Dreams, a novel, she has explored her Portuguese heritage in The Iberian Americans and Stories Grandma Never Told: Portuguese Women in California. Sue earned her BA in journalism at San Jose State University and an MFA in creative writing at Antioch University Los Angeles. She has taught workshops on fiction, writing and selling articles, and publishing at Oregon Coast Community College, online for Writing-World.com and at writing conferences across the U.S. In addition to her writing, she sings and plays the guitar, mandolin and piano, leading her church choir and performing at local venues. Sue and her husband Fred live in South Beach, Oregon. Visit her website at http://www.suelick.com