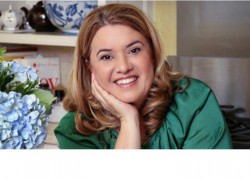 Maria Lawton, known as the “Azorean Green Bean,” is proud to announce the arrival of her debut cookbook, Azorean Cooking: From My Family Table to Yours, a collection of more than 50 recipes that celebrates the traditions of Azorean cooking, culture, and family. “For more than four years, I have made it my mission to preserve my family recipes,” said Lawton. “At first, I just wanted to make sure they would be passed down to my children and future generations – but now, I want to share them with everyone who might miss their Azorean mother or grandmother’s cooking, or whoever wants to know how to recreate the tastes and smells of the past.

This has been a wonderful journey home for me, and I hope this helps others on their journey, too.” In the book, Lawton shares powerful memories of her family and cooking experiences as she walks readers through an array of recipes, ranging from popular Azorean dishes – including Arroz Doce (Sweet Rice Pudding), Massa Sovada (Sweet Bread) and Sopa de Couve (Kale Soup) – to classics like Cozido (Boiled Dinner), Caçoila (Marinated Pork), and Camarão Moçambique (Shrimp Mozambique). Throughout the collection, Lawton makes the cooking process simple, educational, and enjoyable, with a constant focus on a delicious end result.

Maria Lawton was born on the semi-tropical island of São Miguel, the largest of nine islands that make up the Azores, an autonomous region of Portugal located nearly a thousand miles off its coast in the Atlantic Ocean. At age six, Lawton moved to the United States with her family and settled in a Portuguese community in southeastern Massachusetts. Growing up, Lawton was teased with a number of names like “Portagee,” “Fava Bean” and “Greenhorn,” but would always answer with, “Thank you – I’m proud of it!” Her nickname today of “Azorean Green Bean” is an embrace of these cultural elements and a reflection of pride.