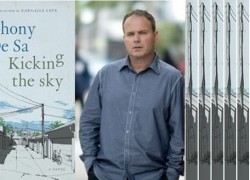 Portuguese-Canadian author Anthony De Sa will be in Providence, RI, to present his book Kicking the Sky, on April 1, at 6pm, at the Providence Athenaeum, located at 251 Benefit Street.

Sponsored by the Department of Portuguese and Brazilian Studies, at Brown University, the session will be conducted by professor Leonor Simas-Almeida,  Senior Lecturer and Director of Post-Graduate Studies, who will introduce the book and lead a conversation with the author. The event is free and open to the public.

Published in 2013, Kicking the Sky reflects the immigrant experience of the Portuguese community  based urban Toronto, Canada.  Set in 1977, and narrated from the perspective of three young men, the story exposes the threats of urban culture against the traditional values of the immigrant community.

Anthony De Sa grew up in Toronto’s Portuguese community. A graduate of the University of Toronto, he did post-graduate work at Queen’s University and also attended The Humber School for Writers and Ryerson University. Currently he works as a teacher-librarian and lives in Toronto with his wife and three boys.  His short fiction has been published in several North American literary magazines.