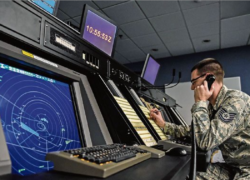 On a map, the Azores appear as nine tiny specks in the middle of the Atlantic Ocean, but their location was to prove strategically vital in two world wars. The Atlantic became a crucial battleground twice within the space of 25 years, as the U.S. arsenal of democracy sent firstly stores, arms, and equipment, followed by many thousands of troops to fight in Europe. In both desperate and closely fought struggles at sea, Germany sought to stem the flow and thereby win the war, by cutting this vital lifeline, using a new weapon—the ocean-going submarine.

The significance of the Azores has been overlooked in most military histories, but this extensively researched and copiously illustrated book from historian Guy Warner provides a detailed but balanced appraisal. The author has had access to archives and photographic collections in the UK, U.S., Portugal, and the Azores, consulting with local historians to produce a book that sheds much new light on a hitherto under-appreciated facet of twentieth-century history.

“For the Portuguese, since its discovery back in the 15th century, the Azores has constituted itself as a central point for replenishment in the Atlantic. The strategic and military importance of the Azores always has been recognized, but it registered a particular dimension in the two wars when it became a logistically desirable region for the powerful belligerent nations. This way, from the Portuguese point of view, it was a struggle for sovereignty, trying to use the proper diplomatic tools to preserve national integrity in a fragile balance, since favouring one side could mean invasion by other. By again, this is also another aspect well covered by Guy Warner’s book.” – Hugo Baptista Cabral,  Capitão-de-Fragata, Marinha Portuguesa – Foreword

Guy Warner, a retired schoolteacher and former MOD civil servant, has written more than thirty publications on aviation, military, and naval history. He also gives talks on these topics, contributes to TV and radio programs, and is a consultant for museums and universities.