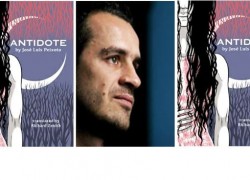 José Luís Peixoto, one of Portugal’s best selling writers, was referred to by Nobel Prize writer José Saramago as “the most surprising revelation in recent Portuguese literature.”

To his credit, Peixoto has published three poetry collections, four novels, a non-fiction book, and three short story collections. In 2001, he won the José Saramago Prize for his first book, Blank Gaze/The Implacable Order of Things. His novel, The Piano Cemetery, is a magical, mysterious tale of betrayal and hope about a family in Lisbon who would rather be piano makers than carpenters. In 2003, a collaboration between Peixoto and the Portuguese heavy metal group Moonspell produced an album and a short story collection, both entitled Antidote.

Together, as companion pieces, the musical album and Peixoto’s book share a single theme, song/story titles and each tale provides a more detailed back story to the song lyrics. The only video released from the album, “Everything Invaded” depicts a wasteland of desolation, with zombie-like creatures, chasing a frightened woman through a forest of rotting trees. Like the trailer for a horror movie, an exorcism or the eye of a tornado, the video is horrific.

As if from a nightmare, the word “antidote” calls out to salvation, the end result, an answer to all prayers, the saving grace from an overdose of poison. Antidote. Healing. A quick fix. A potion. A solution, a cure for what ails. But this is not that.

Recently, been published in English translated by Richard Zenith, with illustrations by Los Angeles artist Michael Manning, Antidote is a pocket book, a mere 78 pages, comprised of ten intense short stories, with titles ranging from “Inside and Above People,” “The Skies that Closed in on Us,” “Walk on the Darkside,” and the title piece, “Antidote.”

This book will break your heart. Strong, emotional tales, fables and warnings of bad dreams come true. The first story, “Inside and Above People,” written in second person, addresses a universal “you,” setting the tone for the collection with a chilling promise. Peixo writes, “We flow like blood inside bodies whenever they are pulled down and swallowed by chasms.” And continues with an eerie threat, “. . .we can destroy what you think is surest. You’re within our reach. We can touch you if we want. We can destroy you.” The “we” is fear, a controlling image, the through-line, connecting each story. The seasons, blood, loss of life, children, a father and a son, a mother and a daughter, a mother and a son. Dark tales about loss. This book will break your heart. This book will make you scream.

Fear is the threat and how, out of fear, people react and are forced into rash actions. The “antidote” is how people cope, move through the spaces of their lives as best as they can. What is the antidote? Is it the drug or solution that saves us? Or, is it the poison itself that brings relief from life’s pain?

Peixoto’s tales read like a combination graphic novel, gothic comic book, horror movie, monologue, and prose poem. Many pages are illustrated with distinct black and white images, reminiscent of tattoos, dark pen and ink drawings of clouds, bodies, a stark pagan sun, a man in bed, the shadow of a child, a woman with wavy dark hair lying prone, tree branches, a crystal glass, a hunter in boots, standing next to a tree, holding a gun, only the bottom portion of his body visible.

Throughout the book, Peixoto also uses repetition as a means or a way of pulling readers inside the story. In “The Skies that Closed in on Us,” which describes a nine year old’s visit to the hospital to see his dying father, Peixoto writes, “My father’s arms wrapping around me. I’ll never forget my father’s arms wrapping around me.” The repetition seals in the emotional connection and drags us into each moment in immediate ways fiction rarely does.

This book will break your heart.

It happens with each story. Emotional engagement, letting the reader in on a family secret, a desolate, hidden place in the mind of the narrator, an escape that is not an escape. There is also a sense of hope underlying the devastation and there is forgiveness. In “Moonlit,” the voice speaks intimately to the reader, “Darkness and hope. In the moon we saw more than our dreams. . . Smiling, we bathed our lips in poison, when we thought we were drinking the antidote.”

Antidote paints a grim, intense look inside the lives of a collection of people facing challenges, most of which were brought about by situations beyond their control, children facing death at an early age, a physical deformity, poverty, a lack of faith, isolation, a loss of dignity.

The writer Wang Ping says, “”People suffer all the time. . . the point is how to suffer with grace, and how to grow stronger and mature through the suffering. Author José Luís Peixoto takes his readers inside the grace and allows us to feel darkness and hope together.

Michael Manning is an artist, tattoo designer, comic book artist and illustrator. He lives and works in downtown Los Angeles. His artwork has been displayed in the US and internationally and is well-known for his graphic novel series The Spider Garden and Transceptor.

Richard Zenith, a writer and translator, has translated the works of Fernando Pessoa, Antonio Lobo Antunes and others. He received a PEN award for poetry translation and was awarded the prestigious Pessoa Prize in 2012.