Book: Anthony Barcellos’ A Land of Milk and Money – Review 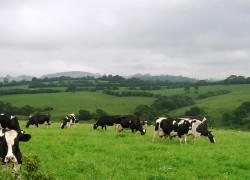 Anthony Barcellos is bilingual in Portuguese and English, and he grew up on his grandparents’ dairy farm in Porterville, California.  Currently, he lives in Davis, California and is a math professor at American River College in Sacramento.  I feel much kinship with him.  He was a first generation college student from an Azorean family who attended the college I’m teaching at now—Porterville College— where he graduated in 1971.

Land of Milk and Money is one of the best pep talks I’ve ever heard.  While reading it, I imagined Porterville residents hand-clapping its success, not that they will relate to the author or his stories, but because he is one of their own.

Barcellos knows the stench.  In California’s Central Valley, Tulare County Portuguese-American dairy farmers call it the smell of money.  Manure fumes of the happiest cows signify the prosperity of immigrant Azoreans who brought with them old country farming skills and dreams of new and improved lives.  Barcellos’s Land of Milk and Money (Tagus Press, 2012) is a novel spanning three generations of the Francisco-Salazar families.  It’s an immigrant narrative with drama that rivals the House of Thebes, and it also contains the ironic themes of French existentialism: alienation, authenticity, and absurdity.   If all the world’s a stage, and life on a family dairy farm in Tulare County is the scene of primeval strife with the gods of labor and sacrifice, then our hero is no uncommon Odysseus of the unbridled seas, nor an abandoned infant who becomes a king by solving riddles, but rather the individual attempting to realize his potential from the clay dust from whence he came.

In our kinship, we know how difficult it is to step beyond social and familial expectations.  In Porterville, sons and daughters tend to follow the footsteps of their parents.  They often learn the family business and subsist on small town cultural resources.  Perhaps aspiring scholars attend Porterville College for two or three years.  But it’s hard to get release time from work, and since the nearest four-year institution is over an hour away, many students have trouble completing degree programs.

Aside from the stories, Barcellos’ novel is a success story on its own: it embodies hard work, spiritual striving through hours of loneliness, and it is evidence that a Porterville boy can take the road less traveled—the path of higher education—and find his own way.  But academia isn’t easy and there may be few, if any, role models: no Virgils to guide the pilgrim into the unchartered rigors of higher intelligence. Barcellos employs the rhetoric of immigrant pilgrimage—dreams, promises, sacrifice—the same ethos that twice elected President Barack Obama—the audacity of hope.

The novel begins on June 1983 with courtroom drama.  The matriarch Teresa Francisco has passed away and family members who have survived her are challenging the authenticity of the will.  At stake are the terms by which her farm assets will be divided between the eldest sons and their children.

Facts and names are complicated because the men have at least four surnames—the son is named after the father.  If the father’s name is “Candido,” nicknamed Candy, then the son’s name is Candido, nicknamed Candy Junior.  As a character in the novel says, “There are more Candy’s than a sweetshop.”

Apparently, all the Candy’s have the same visage: “Despite their differences in size and age, the Franciscos all bore the stamp of their Azorean heritage—variations on the theme of brown eyes and dark hair (if it hadn’t gone gray or disappeared).”  The Franciscos are clearly out of their element, their milieu, if you will, and are uncomfortable with the legal proceedings.  Undoubtedly, they’d be more comfortable baling hay or straining juicy cow udders, which, incidentally, appear on the book’s front cover.

Due to propriety, I nearly had the urge to shield my students’ eyes when I passed the book around the classroom.  Those laden udders full of cream, a lithe tail swishing them free of flies.

There is little room for confusion about what the novel is about.  Cows and dairy farm stench—like ammonia dowsing burning tires— wafts in the background of each chapter.  The mental acuity of cattle is on full display as the Franciscos naively herd together as respondents in the legal action.  We assume that the men checked their mucky boots at an indiscriminate checkpoint or convenient cloakroom located outside the court gallery.

The Franciscos are cognitively outgunned by the attorneys representing them.  Although the veteran litigators represent the Franciscos in the initial legal proceedings concerning Teresa’s will, they also represent individual interests in impending lawsuits.  They need to win the contested will case to have future grounds for ripping each other apart on behalf of their clients—the feeding frenzies of testosterone driven Anglos.

At various points in the novel, we witness the attorneys lying in wait for the weakest of the human herd.  They collectively pounce on the slow-moving Beatrice Onan, the plaintiff’s attorney, who limps to her last breath by her own incompetence.  Her argument rests on the opinion that Teresa’s signature on the will had been forged.  Her evidence is the testimony of a handwriting expert named Peggy Hunter, who obtained her credentials from a bogus correspondence school.  The legal lions hungrily rip flesh from bones: they punch holes in Hunter’s credibility and then offer their own handwriting expert to invalidate her testimony.

In addition to food chain courtroom scenes, the novel entertains subplots involving limbs of the Francisco-Salazar family tree.  In comparison, family drama makes courtroom scenes appear tame.  We meet the predators and prey, or the “users and the used” of the family romance, as Sigmund Freud would have labeled it.  An uncle makes advances toward his niece, a cartoonish Shrek-like husband leaves his tottering wife for the wife’s best girlfriend, an Anglo groom is bribed by a substantial dowry to marry an unwanted spinster, a son who likes to bake never quite cuts the apron strings, nor does he ever profess that he’s gay, and brothers struggle for control of the family farm.

In spite of family turbulence, Azorean descendents recount homeland traditions by gathering for the Festa do Divino Espirito Santo, a religious ceremony honoring the Holy Spirit, which doubles as a singles meat market.

At the festa, some girls ask the Francisco boys what they do for a living.  To the boys, the question clearly indicates that the females are from outside Tulare County.  Their answer is always the same: “We do what our dads did,” which is a common theme in the novel: most farm boys don’t have time for school.

They follow their fathers’ footsteps in dawn ‘till dusk occupations.  A dairy farm revolves around feeding and milking cycles—cows must be fed (not too much corn silage in lieu of hay) and regularly milked to release mammary burdens.  Alfalfa must be grown on or delivered to the farm.  Fields must be properly irrigated.  Manure must be distributed or shoveled into fertilizer piles.

This is the stench of California’s Central Valley—intensely enhanced when the crazy garlic train trudges through.

However, Paul Francisco is an exception.  He seems a lot like the author—a kind of Bartleby the Scrivener math nerd who prefers reading books in the hayloft over performing chores.  His plans don’t require him to seek the pseudo-paranormal advice of a Magic 8-Ball like his cousin Henry does.  He   enrolls in community college and transfers to a private tech university in Southern California.

Unlike his brothers, Paul wants to get out of the Central Valley.  School emancipates him from the servitude of the dairy business.  He yearns for a life of the mind removed from the toils of his upbringing.

When he was a kid, Paul stood above his St Bart’s classmates.  Teachers asked him to read and interpret poetry that fourth graders didn’t understand.  But he remained grounded by a circle of friends and siblings who helped him become conscious of worldly fallacies and false starts.

A laugh aloud vignette involves Paul moderating a conversation between two boys in St. Bart’s playground sandbox.  A smaller boy makes fun of his heftier nemesis.  The rival patiently waits his turn to make fun as the conversation shifts to the prospect of being naked in the gym shower.  As little boys tend to do, they talk about penises.