Book: Another City upon a Hill – By Joseph A. Conforti – Editor’s Note 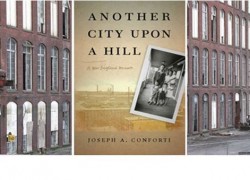 Tagus Press at UMass Dartmouth, in partnership with the University Press of New England (UPNE), have launched the publication of Another City Upon a Hill: A New England Memoir by Joseph A. Conforti, a searching portrait of a city battered by the collapse of the textile industry woven into a spirited coming of age story.

This gripping memoir is both a personal story and a portrait of a distinctive New England place — Fall River, Massachusetts, once the cotton cloth capital of America. Growing up, Joseph Conforti’s world was defined by rolling hills and granite mills, and forests of triple-deckers. Conforti, whose mother was Portuguese and father was Italian, recounts how he negotiated those identities in a city where ethnic heritage mattered. Paralleling this personal account, Conforti shares his family’s story of three generations of Portuguese and Italians making their way in a once mighty textile city.

Another City Upon a Hill: A New England Memoir is volume 22 of the Portuguese in the Americas Series published by Tagus Press at UMass Dartmouth, the publishing arm of the Center for Portuguese Studies and Culture. The Series documents the variety and complexity of the Portuguese-American experience by publishing works in the social sciences, history and literature.

Joseph A. Conforti is a distinguished Professor of American and New England Studies (Emeritus) at University of Southern Maine. He is the author of five books, including Saints and Strangers: New England in British North America and the acclaimed Imagining New England: Explorations of Regional Identity from the Pilgrims to the Mid-twentieth Century.

Conforti will be signing copies of Another City Upon a Hill at the Fall River Historical Society, 451 Rock St., on Sunday, September 15, from noon to 3:00 p.m. Book talks and signings will also take place at the Maine Historical Society in Portland, Maine on Thursday, October 17 at 7:00 p.m. and at the UMass Lowell Conference Center on November 13 at 6:30 p.m.