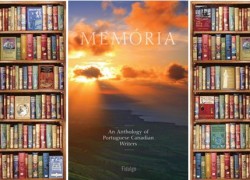 This anthology is the first of its kind, and, for the moment at least, unique, though its uniqueness, I predict (and hope), will not last long.  Editorially, it is also a canny book, for it offers glimpses and tastes of excellent writing, with no risk of surfeit.  There is just enough here to make one wish for more.

The book meriting these observations is Memória, conceived and ably edited by Fernanda Viveiros, with an informative foreword by Onésimo T. Almeida on the characteristics of Portuguese communities throughout North America.[1]  The book bears a descriptive subtitle: “An Anthology of Portuguese Canadian Writers.”  Notice that the subtitle omits what many may consider to be an obligatory hyphen between “Portuguese” and “Canadian,” for this omission, seemingly slight, makes a large point.  What it says is that Memória is a collection of Canadian writing by Canadian writers who happen to be of Portuguese ethnicity and descent.

Memória  is comprised of representative works by fifteen writers, ten of whom are men and five are women.  Except in two or three instances, these names are new to me.  (Missing from the collection, however, are the well-known names of Erika de Vasconcelos and Anthony De Sa, and that’s a pity, for their best work would have fit in nicely, in my opinion, alongside the work of those writers represented in Memória.)  Most of the works in the three genres represented—the short story, poetry, and drama—convert experiences of the Portuguese who have emigrated to Canada either permanently or temporarily.  It is not my interest here to read all or any of these poems and stories or the one play as historical or sociological documents (others may do that, if they so wish, though I would advise against it) but to say something about them as aesthetic creations, for there seems to me little doubt that the standard for inclusion in this collection are literary.

There are highly accomplished poems by Laureano Soares (“A Mala de Cartão,” with its once-ubiquitous eponymous symbol for departure and emigration), Nelia Botelho (a playfully romantic “Moon Jelly” ), Irene Marques (“Writing and Speaking,” biting love lines that end: “love is / the salt that tempers the meals of your day / and makes my limbs walk”), Paul Serralheiro (“Railroad Men,” a look at how geography and work contribute to a young person’s coming of age),  Eduardo Bettencourt Pinto (a velvety if plaintive voice), Edith Baguinho (“Eternity Cuts In/”—experimental in form, elusive in meaning), and Paulo da Costa (“ser português,” a “list” of witty, trenchant definitions of what it means to be Portuguese).  Aptly, “ser português” opens the collection.

The seven stories are Emanuel Melo’s “Avó Lives Alone,” Richard Simas’ “In Walls,” Esmeralda Cabral’s “Three Candles for the Virgin Mary,” Antonio M. Marques’ “The Last Shot,” Humberto da Silva’s “My Starling,” Clemente Alves’ “Confessions of an Altar Boy,” and Tony Correia’s “One Man’s Island.”  Each one of these is worthy of extended consideration, though I shall limit myself to a word or two about them.  Both “The Last Shot” and “Avó Lives Alone” are deeply sensitive treatments of the loneliness that is part of the aftermath of loss in the former and ageing in the latter.  “My Starling” explores the mysteries of psychological complexity in which the etiology of learning to shoot and kill morphs into a weird form of passion for the prey he would formerly have killed.  With its exaggerated emphasis on flatulence as plot-motif raised to trope, “Confessions of an Altar Boy” reads like a modern fabliau.  A quiet epiphany occurs at the end of “Three Candles for the Virgin Mary,” a story of loss, death, and healing occasioned by a return to Lisbon.  “In Walls” centers on a man’s attempt to communicate with future residents of the house he is remodeling by embedding messages behind its rebuilt walls. What goes around comes around is one way of describing what happens in “One Man’s Island” when an emigrant from Portugal is pressured into divesting himself of the chickens he has introduced into a neighborhood that turns out to be hostile to the idea.

“Funeral in White,” by Aida Jordão, is, decidedly, an experimental play.  Juxtaposing scenes of life back home in Lisbon and Toronto (scenes that are to be perceived as taking place simultaneously), it tells a story of adultery, disability, maternal dominance, and the death of an unmarried, fortyish, would-be bride presented at last, as a final irony, in bridal white.  Skirting sentimentality without sacrificing sentiment, this haunting play resonates well beyond its text.  “Funeral in White,” recalling (as it does for me) Lorca’s “La Casa de Bernarda Alba” or Pessoa’s “O Marinheiro,” closes out this pioneering collection.

From first page to last Memória is a source of pleasure, offering keys into what has been a largely undiscerned body of literature.

[1] Published in the United States by Fidalgo Books in 2013.