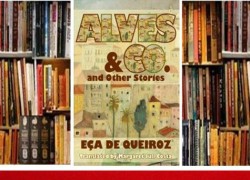 Eça de Queiroz is considered to be Portugal’s greatest novelist. Dedalus has embarked on a project of making all his major works available in English in new translations by Margaret Jull Costa.

In this volume, comprising one short novel and six short stories, the reader is introduced to a dazzling variety of worlds and characters: a deceived husband who finds that jealousy is not the answer, a lovelorn Greek poet-turned-waiter working in a Charing Cross hotel, a saintly young woman soured by love, a follower of St.Francis who learns that an entire life of virtue can be besmirched by one cruel act, Adam in Paradise pondering the pros and cons of dominion over the earth, Jesus healing a child, and a loyal nursemaid forced to make a terrible choice.

An opera, The Yellow Sofa, by Julian Philips based on Alves & Co was performed for the first time at Glyndbourne,London,UK, in 2009.

José Maria de Eça de Queiroz (1845-1900), probably best known for The Maias, a powerful portrait of society in decline, occupies the same place in Portuguese literature as Dickens does in English, Balzac in French and Tolstoy in Russian. Eça de Queiroz, began his career as a self-declared realist, but as his writing evolved, his novels and stories became a potent blend of realism and fantasy.

Dedalus, which has done more than any publisher to bring Eça’s work to the attention of the English-speaking world, continues the project with Alves & Co, also known as The Yellow Sofa, a comic novella about infidelity discovered in a trunk after the author’s death, and half a dozen short stories published in his lifetime, all rendered into English in a new translation by Margaret Jull Costa.

An opera, The Yellow Sofa, by Julian Philips based on Alves & Co was performed for the first time at Glyndbourne in 2009.

She has translated the following books for Dedalus: The Great Shadow by Mário de Sá-Carneiro,  The Dedalus Book of Portuguese Fantasy (eds. Eugénio Lisboa and Helder Macedo),  and, by Eça de Queiroz: The Mandarin, The Relic, The Tragedy of the Street of Flowers, The Crime of Father Amaro, Cousin Bazilio, The Maias, The City and the Mountains and Alves & Co. Dedalus will publish the Mystery of the Sintra Road  by Eça de Queiroz in 2013.