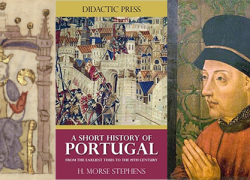 The story of Portugal possesses a peculiar interest from the fact that it is to its history alone that the country owes its existence as a separate nation. Geographically, the little kingdom is an integral portion of the Iberian Peninsula, with no natural boundaries to distinguish it from that larger portion of the peninsula called Spain; its inhabitants spring from the same stock as the Spaniards, and their language differs but slightly from the Spanish.

Its early history is merged in that of the rest of the peninsula, and but for two great men, Afonso Henriques, the first king of Portugal, and John I., the founder of the house of Aviz, Portugal would not at the present day rank among the independent nations of Europe. The first of these monarchs created his dominions into a kingdom like Leon, Castile, and Aragon, and the latter encouraged the maritime explorations which gave the little country an individuality and national existence, of which it was justly proud.

When Philip II annexed Portugal in 1580, it was at least a century too late for the Portuguese to coalesce with the Spaniards. They had then produced Vasco da Gama and Albuquerque and other great captains and explorers, who had shown Europe the way to India by sea; and their tongue had been developed by the genius of Camões and Sá de Miranda, from a Romance dialect, similar to those used in Galicia, Castile, or Aragon, into a great literary language. Conscious of its national history, Portugal broke away again from Spain in 1640, and under the protection of England maintained its separate existence during the eighteenth century…

All earlier printed editions are out of print. The current offering is an illustrated e-book for the Kindle platform, offered at the symbolic price of 99 ¢.