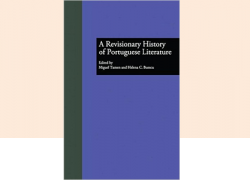 This collection of original essays traces the history of Portuguese literature from the medieval period to the present, providing provocative new interpretations of this previously neglected literary history. The volume serves as a comprehensive introduction to Portuguese literature to students new to the field, and provides new insight into the ongoing controversies on the subject. The Introduction and Afterword explore the relationship between literary history and revisionism.

Miguel Tamen (PhD in Comparative Literature, University of Minnesota, 1989) specializes in philosophy, literature and Portuguese literature. His interests include the philosophy of language, interpretation, and moral philosophy, as well as aesthetics. He is Professor of Literary Theory and Chair of the Program in Literary Theory at University of Lisbon. He has been a visiting professor at the University of Chicago since 2000, where he has taught courses on Fernando Pessoa, Portuguese Poetry, Metaphysics as a Disease, Self-Examination, Portuguese Obituaries, and The Nightmare of Culture, among others. Tamen is the author of six books, including The Matter of the Facts (Stanford UP) and Friends of Interpretable Objects (Harvard UP).

Helena Carvalhão Buescu is professor of Comparative Literature at Universidade de Lisboa. Main areas of interest focus on the 19th and 20th centuries, as well as theoretical issues in comparative and world literature. She regularly collaborates, as Visiting Professor or Researcher, with Universities in Europe, Brazil, and the USA. She has published ten books and more than one hundred essays. She founded and directed the research Centre of Comparative Studies (Universidade de Lisboa) and belongs to the Board of the Institute of World Literature (coordinated by Harvard University). Also member of Academia Europaea. Fellow of St. John’s College (Cambridge). Main books include: Chiaroscuro: modernidade e literatura (2001), Cristalizações: fronteiras da modernidade (2005), O Grande Terramoto de Lisboa (2005), Emendar a Morte: pactos e(m) literatura (2008). Her last book appeared in 2013, Experiência do Incomum e Boa Vizinhança: literatura comparada e literatura-mundo.