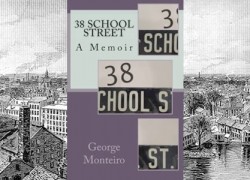 George Monteiro never intended to write a memoir. But as the stories, poems, and sketches about his childhood in a Depression-Era New England mill town began to pile up, he found that he was writing a composite memoir of Valley Falls, Rhode Island and its Portuguese American community. Like his parents, many of these people had emigrated from rural Portugal to find work in the textile mills and build a life more hopeful and prosperous than the one they had left behind. Through its various forms of expression, this memoir seeks to understand Francisco and Augusta Monteiro, who found a life that was more difficult than they expected. But it also paints a vivid picture of the colorful characters whose varied adaptations to American life made the Portuguese community of Valley Falls both a unique environment in which to grow and one that is familiar to everyone in this nation of immigrants.

George Monteiro, Professor Emeritus of English and of Portuguese and Brazilian Studies at Brown University, is a poet and the author and editor of books on Henry James, Henry Adams, Robert Frost, Stephen Crane, Emily Dickinson, Elizabeth Bishop, Fernando Pessoa, and Luis de Camões, among others. He served as Fulbright lecturer in American Literature in Brazil–São Paulo and Bahia–Ecuador and Argentina; and as Visiting Professor in UFMG in Belo Horizonte. In 2007 he served as Helio and Amelia Pedroso / Luso-American Foundation Professor of Portuguese, University of Massachusetts Dartmouth. Among his recent books are Stephen Crane’s Blue Badge of Courage, Fernando Pessoa and Nineteenth-Century Anglo-American Literature, The Presence of Pessoa, The Presence of Camões, Conversations with Elizabeth Bishop, Critical Essays on Ernest Hemingway’s A Farewell to Arms, Fernando Pessoa and Nineteen-Century Anglo-American Literature and Elizabeth Bishop in Brazil and After: A poetic Career Transformed. Among his translations are Iberian Poems by Miguel Torga, A Man Smiles at Death with Half a Face by José Rodrigues Miguéis, Self-Analysis and Thirty Other Poems by Fernando Pessoa, and In Crete, with the Minotaur, and Other Poems by Jorge de Sena. He has also published collections of poems, The Coffee Exchange,Double Weaver’s Knot and Pessoa Chronicles: Poems 1980-2016. More…