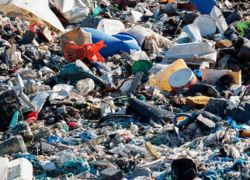 In contrast to enthusiastically encouraging conditions that attract the return of foreign holidaymakers, the Portuguese Government is banning the importation of all plastic waste and other rubbish.

Portugal has been an attractive dumping ground for huge amounts of waste because of the low fees charged for disposals in landfill sites here.

Waste imports have been suspended until the end of 2020 to protect domestic landfill capacity, according to a government statement.

“This decision is intended to ensure we have sufficient national capacity in waste processing facilities.”

The government statement added that Portugal has already blocked 246,000 tonnes of trash from entering the country since the start of this year.

The Reuters news agency reports that Portugal charges €11 to process one tonne of trash. The European average is said to be €80. In the Netherlands, incineration of waste costs €175 per tonne, according to another source.

The coronavirus pandemic has not only caused a vast amount of medical and economic problems, but a much less reported surge in plastic waste.

This is due in part to the far greater use worldwide of such materials as aprons, gloves and other protective gear by hospital and care home staff.

Plenty of plastics are also being used by the general public under lockdown conditions. Food ordered from stores online is often delivered in plastics that the self-isolating community can’t easily dispose of in the best way.

The government is due to reconsider its attitude on landfills and waste management in the summer.

Meanwhile, it has already limited its recycling efforts for the duration of the pandemic due to concerns over the health risks to workers coming into contact with contaminated plastic waste, according to the Reuters news agency.

Some 330,000 tonnes of foreign trash, including waste containing hazardous substances, arrived in Portugal from other countries in 2018, the government’s environment agency APA has said.

110,000 tonnes ended up in the 11 landfills in this country authorised to receive trash from abroad.