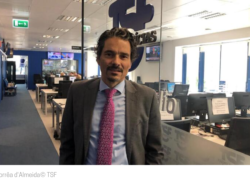 Based in New York city the ‘All4Integrity’ initiative was launched with the goal of establishing a National Integrity System in Portugal.

Under the motto “Free my country from corruption” the aim is to “Identify, recognize, celebrate, and reward the work carried out by individuals, organizations and institutions, in the prevention and fight against corruption in Portugal.”

The initiative has created the ‘Tágides Prize’ underway to award those who have dedicated themselves to the effort. “All4Integrity:#libertemomeupaísdacorrupção” invites all Portuguese citizens to participate. 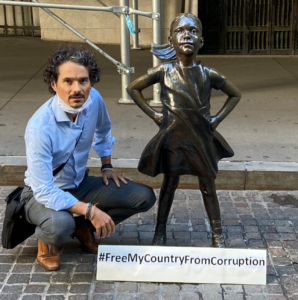 D’Almeida next to the iconic ‘Fearless Girl’ on Wall Street (October 5th, 2020)

The movement founder, André Corrêa d’Almeida, professor at Columbia University, New York, considers that the fight against corruption in Portugal is far behind when compared to other countries of the European Union.

According to him, the issue has only recently been at the top of the political agenda.

Until September 30th, applicants can access the award’s website and nominate a person or group, in the national territory, who have contributed to the effort to democratize the debate on the topic of corruption and the promotion of ethics in the country’s public and private sectors. To enter the contest visit (in Portuguese) the ‘Tágides Prize’ initiative website.

Five categories were created and each one will contemplate a winner:

Next November, 100 candidates will be selected and their names will be revealed to the public in October 2021. The applicants will be selected by a 35-member jury of experts, known for their effort in preventing and/or fighting corruption, such as journalist Luís Rosa, journalist Sandra Felgueiras, politicians Ana Gomes and Miguel Poiares Maduro. The complete jury list is available here.

The awards ceremony will be held on the week of December 9th, the International Day Against Corruption. Each award will consist of a statuette symbolic of the initiative, a diploma, and a media kit.

The European Parliament has estimated that corruption in Portugal costs about 8 to 10% of the Gross Domestic Product (GDP), which represents approximately 20 billion euros. According to GRECO, the Council of Europe entity that monitors the fight against corruption, in 2019, only one of the 15 anti-corruption measures recommended in 2016 was fully implemented in Portugal.

In addition, a survey carried out in 2019, by the Flash Eurobarometer, revealed that favoring friends and/or family members in public institutions (59%) and in businesses (55%), as well as paying bribes (34%), are the most common practices in Portugal.

André Corrêa d’Almeida is an adjunct professor at Columbia University in New York, where he teaches at the School of International and Public Affairs (SIPA) and is an assistant director of the Master of Public Administration in Development Practice. He holds a doctorate from the University of Denver, Colorado, a master’s in Management from the University of Saint Joseph (China), and a degree in Economics from the Universidade Nova de Lisboa. He was a senior advisor to the United Nations Development Program of the UN and currently advices de New York Academy of Sciences on Artificial Intelligence (AI). He is a regular contributor to the Apolitical, the Huffington Post, The Guardian and Publico. He is the editor and co-author of the books Smarter New York City: How City Agencies Innovate (Columbia University Press, 2018) and Reform of the Parliamentarian System in Portugal: Analyses and Tools for an Urgent Dialogue (Principia Editora, 2019).