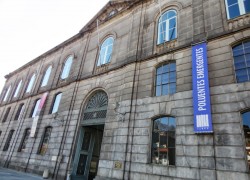 The award, decided by a jury made up of tourism experts and magazine staff, was announced by the Embassy of Portugal in London, UK, on Thursday.

“We think it is very important for us, for the country and for the city,” said António Gouveia Santos the executive director of the center.

According to Gouveia Santos, the center currently hosts an average of 200 events a year. Around 300,000 people attend such events, representing more business and jobs for local hotels and restaurants, he said.

The criteria for the award considered the quality and range of services, the relationship between quality and price, online presence, website and other applications, sustainability and environmental awareness, customer service and business vision.

Designed by French architect Jean Colson, the Porto customs house was built in 1869 on the north bank of the River Douro. The complex covers 50,000 square meters and has a total of 22 meeting rooms. The building is made up of a central block and two symmetrical lateral wings at river level. Most recently, the old building was restored under the supervision of architect Souto Moura.

Porto population 237,559 (2011), has undergone a remarkable renaissance in the last two decades. It is Portugal’s second largest city and one of the largest urban areas of the Iberian Peninsula.

At the mouth of the Rio Douro, the city presents a diversity of styles from narrow medieval alleyways to extravagant baroque churches, romantic little squares and wide modern boulevards.

Porto is also internationally known for exporting the famous Port wine and for its Historical Center listed a World Cultural Heritage site by UNESCO..

Porto was elected last February, for the second time, “Best European Destination” of the year by the European Consumers Choice. Porto was first awarded the honor in 2012.