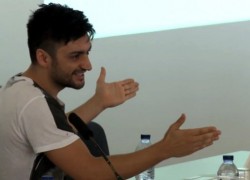 Portuguese advertising copywriter, Hugo Veiga, tops the world’s list of “The 10 Best Ads of 2013″   at the  Adweek magazine “year’s greatest triumphs in concept and craft.”  Adweek is a leading source of news for marketing, media and advertising professionals.

Veiga is the creator of “Real Beauty Sketches” a three minute advertising video, produced by John X. Carey (Paranoid US,) for the Ogilvy & Mather of Brazil. The video was also named “Best of the Year” by Time Magazine.

Only 4% of women around the world consider themselves beautiful.  Addressing the issue of women being their own worst beauty critics, the video portraits beauty as source of confidence, not anxiety, exploring how women view their own beauty in contrast to what others see.

Born in Porto, Portugal, Hugo Veiga, 33, works at Ogilvy São Paulo since 2011.  He began his career at McCann Erickson – Lisbon, after winning a national competition for young creatives.

In 2004, he won the Young Creatives Competition of the International Advertising Festival in Portuguese language (Sinos), which gave him the opportunity to start working in Brazil.

Considered one of the top copywriters in the world, in his career he has develop campaigns for brands like Coca Cola, Burger King, Claro, Motorola, Castrol, Dove, Allianz, Hellmanns, Tang and Salvation Army.

Outside advertising, Veiga has participated in several artistic projects as a screenwriter, musician and performer.