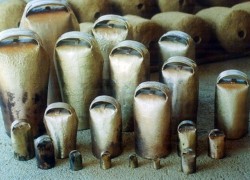 Portugal’s southern region of Alentejo was distinguished, by United Nations Educational Scientific and Cultural Organization (UNESCO), for “chocalhos” the ancestral manufacture of cowbells listed today as “Intangible Heritage of Humanity” by the organization.

The bells are made throughout mainland Portugal and on the islands, wherever animals are grazed. Today, there are master cowbell makers in just seven places: in northern Portugal, in Bragança; in the centre, in Asseiceira (Tomar municipality) and Ereira (Cartaxo municipality); in the south of the country, in Estremoz, Reguengos de Monsaraz and Alcáçovas on the island of Terceira (Azores), in the hamlet of Grota do Medo (Angra do Heroísmo municipality). Alcáçovas town, in the Viana do Alentejo municipality, is considered the Portuguese “capital of chocalho.”

The cowbells come in many shapes and sizes and are primarily used by farmers to locate cattle grazing on pastures. The larger bells can reach volumes of up to 100 decibels.

This is the second time Alentejo has been awarded this distinction by the UNESCO Committee for the Safeguarding of Intangible Cultural Heritage, described as “intangible cultural heritage in urgent need of safeguarding.”

This year, five new items were added to the UNESCO’s list. Besides Portugal, awarded countries are Colombia, Mongolia, the former Yugoslav Republic of Macedonia and Uganda. There are currently 43 cultural items added to the list.

In 2011, Fado, Lisbon’s mournful song, was also added to UNESCO’s list of Intangible Cultural Heritage. According to UNESCO, intangible heritage includes traditions, cultural identity and skills passed on within cultures.