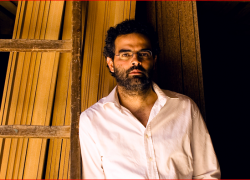 The Consulate General of Portugal in Boston, in partnership with Lisbon (Portugal) based Instituto Camões, is sponsoring a lecture by Portuguese novelist Gonçalo M. Tavares to take place at Boston College.

Tavares, a professor of epistemology at the University of Lisbon, will present the English translation of his latest book, The Neighborhood, from the original Portuguese titled, O Bairro.

The book was translated by Roopanjali Roy, a Portuguese translator currently teaching Hindi and Indian culture at the Catholic University in Lisbon, Portugal.

Published by Texas Tech University Press,  the book has an introduction by author Philip Graham , a professor in the creative writing program at the University of Illinois at Urbana-Champaign, who also teaches in the low-residency MFA program of the Vermont College of Fine Arts.