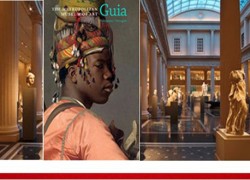 Besides the Portuguese language edition, the new guide was also issued in Chinese, French, Italian, Japanese, and Spanish. Additional languages will be added in 2014.

Edited with preface by the Museum Director, Thomas P. Campbell, the new guide features about 600 color reproductions of the most relevant Museum’s masterpieces, with descriptions by the Museum’s experts.

Visitors will also be able to enjoy hour-long guided tours of the Museum’s collection with the assistance of Museum-trained Portuguese language speaking volunteers. The tours start every fifteen minutes, between 10:00 a.m. and 4:00 p.m., throughout the day. Additional offered languages include French, German, Italian, Japanese, Korean, Mandarin, Russian, and Spanish.

Located in the City of New York, The Metropolitan Museum of Art was established in 1870, for the purpose of “encouraging and developing the study of the fine arts.”  Its main mission is “to collect, preserve, study, exhibit, and stimulate appreciation for and advance knowledge of works of art.”