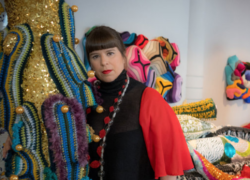 One of the most prominent visual artists in the world, Vasconcelos’s work consists of transforming everyday objects in inventive and unexpected ways. She creates traditional clichés of her Portuguese cultural heritage with humor, provocation, irony and sensuality. Her unconventional, “bigger than life” baroque installations are symbolic and imaginary. 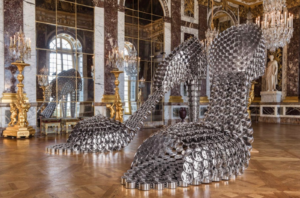 She has created public works of art in more than 35 countries and has been the subject of more than 500 exhibitions.

This is not her first exhibit in the United States. Last year she was invited by the The MassArt Art Museum (MAAM), the Boston’s new contemporary art museum, to create a large-scale, site-specific installation for its inauguration on February 22, 2020.

In January of 2013, her work was presented at the “How to Tell the Future from the Past” a group exhibit at the Haunch of Venison Gallery, in Manhattan, New York City. 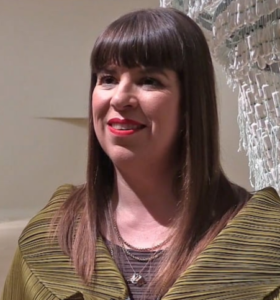 Of Portuguese descent, Joana Vasconcelos was born in 1971, in Paris, France, but is currently based in Lisbon, Portugal. The artist came to the public’s attention for her display at the 2005 Venice Biennale

She has exhibited regularly since the mid-1990s and her work became known internationally after her participation in the 51st Venice Biennale in 2005, with the piece “A Noiva” — a monumental chandelier composed of female tampons.

Her exhibition “I’m Your Mirror,” which was featured at the Guggenheim Museum in Bilbao, Spain, was the 13th most visited worldwide in 2019 year, according to The Art Newspaper.

Currently, Vasconcelos is the focus of exhibitions at Yorkshire Sculpture Park in the UK (through January 9, 2022).

RICHARD TAITTINGER GALLERY was founded in 2014 by Richard Frerejean Taittinger at 154 Ludlow Street. A 6,000 sq ft space on 3 floors designed by Studio MDA. A pioneer of New York City’s Lower East Side art scene, today RTG is surrounded by cultural institutions including the New Museum, the International Center for Photography, and the Brant Foundation. RTG represents a diverse roster of leading international artists at various stages of their careers covering every medium and photography. Working closely with Museum curators, RTG had successfully placed works by our artists in over 24 prestigious Museum collections. RTG advocates for price transparency and democratization of the art world showing artists from outside the traditional art world system together with established talents. In 2019 RTG launched a print program offering affordable works starting at $500 to encourage collecting. The RICHARD TAITTINGER GALLERY supports artists attuned to ethical values, human rights, diversity, feminism, and environmental issues.