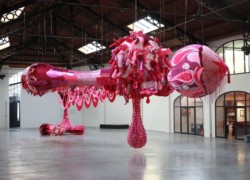 For the grand opening, Joana Vasconcelos will premiere some of her most vibrant sculptures, in a monumental installation, throughout August 2, 2020.

Visitors of all ages are invited to participate in the full-day celebration, which is free and open to the public. However, registration is encouraged and may not guarantee admission if capacity has been reached.

Joana Vasconcelos is one of the most prominent visual artists in the world. In her first U.S. solo show to date, she will honor Elizabeth “Mumbet” Freeman, “an enslaved woman whose court battle for her freedom in 1781 helped make slavery illegal in Massachusetts.”

Her vibrant and playful sculptures celebrate the creative lives of women. The large-scale installation entitled ‘Valkyrie Mumbet’, is the newest in her Valkyries series, named after Norse female war goddesses, which pays homage to inspiring women.

“Our primary goal has always been to show what’s new and to make contemporary art accessible to everyone, and the MassArt Art Museum will make that truly possible,” said Lisa Tung, executive director of the museum, in a press release.

“We have reimagined the museum-going experience to create an inviting and welcoming place for all our visitors, offering a richer engagement with exhibitions and programming. Our artists will also feel supported to realize their vision, and our students will be invited into the process to learn from the professional artists they aspire to be.” Tung stated. 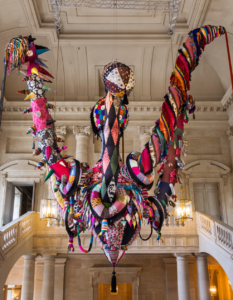 Joana Vasconcelos’s work consists of transforming everyday objects in inventive and unexpected ways. She creates traditional clichés of her Portuguese cultural heritage with humor, provocation, irony and sensuality. Her unconventional, “bigger than life” baroque installations are symbolic and imaginary.

From a feminist cultural perspective, her iconic monumental art is associated with domesticity and craft, including household appliances, fabric and crochet, transfiguring traditions and women’s roles.

In January of 2013, her work was presented in the United States at the “How to Tell the Future from the Past” a group exhibit at the Haunch of Venison Gallery, in Manhattan, New York City.

Of Portuguese descent, Joana Vasconcelos was born in 1071, in Paris, France, but is currently based in Lisbon, Portugal. The artist came to the public’s attention for her display at the 2005 Venice Biennale.

She has exhibited regularly since the mid-1990s and her work became known internationally after her participation in the 51st Venice Biennale in 2005, with the piece “A Noiva” — a monumental chandelier composed of female tampons.

Her exhibition “I’m Your Mirror,” which was featured at the Guggenheim Museum in Bilbao, Spain, was the 13th most visited worldwide last year, according to The Art Newspaper.

The new MAAM, dedicated to teaching museum for students and faculty at the Massachusetts College of Art and Design, will stand as an arts community resource. The 15,000 square-foot venue will offer professionally and imaginatively curated exhibitions featuring influential, emerging and well-known artists from around the world.