Architecture: The work of Siza Vieira at The Museum of Modern Art – NYC 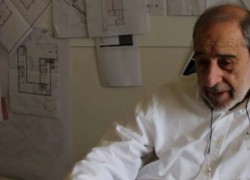 Portuguese architect Álvaro Siza Vieira will the guest speaker at the Museum of Modern Art, NYC, on June 8, where his work will be presented at the event organized by The Architectural League of New York in partnership with Aicep Portugal Global.

Scheduled for 6:30pm, at the Roy and Nina Titus Theater 1, the event is sold out.

Recognized internationally, as one of the most influential architects of his generation, Siza Vieira has been awarded many prestigious awards namely the 1992 Pritzker Prize the worlds most prestigious architecture honor.

He is also the recipient of the honorary title of Fellow of the American Institute of Architects and in 1998 the Praemium Imperiale from the Emperor of Japan. More recently, Siza was awarded the 2009 RIBA’s Royal Gold Medal and the 2011 International Union of Architects Gold Medal.

Siza Vieira will design the future Interpretation Center of Angra do Heroism, Terceira, to be installed in the “Casa dos Pamplonas,” in what will be his first work in the Azores archipelago.