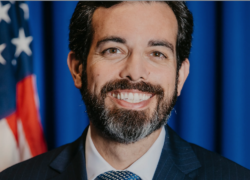 Zachary Cunha has been appointed as the next U.S. Attorney for Rhode Island. The appointment was approved by the United States Senate Tuesday night.

Cunha is currently the chief of the Civil Division in the U.S. Attorney’s Office for the District of Rhode Island. He joined the office in 2014.

He will be replacing Aaron Weisman, who was appointed by former President Donald Trump and resigned in February. Appointments for U.S. attorney require Senate confirmation.

In September, Rhode Island’s Democratic Sens. Jack Reed and Sheldon Whitehouse recommended Cunha to President Joe Biden to be named the next U.S. attorney for the state, calling him an experienced prosecutor with an exemplary record of service.

“We are pleased that the full U.S. Senate has confirmed Zachary Cunha to be Rhode Island’s U.S. Attorney,” said Senators Reed and Whitehouse in a joint statement.  “Mr. Cunha already has an exemplary record of service in the U.S. Attorney’s office.  He steps into this new, elevated role ready to serve and protect the people of Rhode Island with integrity and distinction.”

He received a J.D. from the George Washington University Law School with honors and his A.B. from Brown University.

Zachary Cunha is a grandson of Portuguese immigrants from Beira Alta, Portugal.