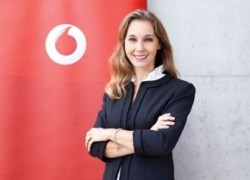 Sara Oliveira has been appointed Director of Brand and Communications at Vodafone Portugal. Oliveira has 16 years of experience in management, working as vice president of the Portuguese-American Post-Graduate Society (PAPS), in Boston, MA.

Oliveira, who has a degree in Economics from the Universidade Nova de Lisboa, with a major in Business Economics, was responsible for Brand Innovation Development at Pepsi Lipton International in Paris. Over the past three years, Oliveira was Global Head of Marketing and Member of the Executive Board of Gallo Worldwide, a joint venture between Unilever and Jerónimo Martins.  She was responsible for the global brand relaunch campain, including the launch of the brand in China and Russia, and the development of activations in Brazil and the first marketing campaign in Angola and internationally.

The Vodafone Group is the mobile telecommunications company with the strongest presence around the world. In March 2012 it had 404 million customers in over 30 countries and the brand is present in a further 40 countries through partnership networks.