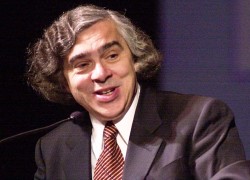 President Barack Obama has appointed Portuguese-American physicist, Ernest Moniz, to head the US Department of Energy.

Described by many as having a brilliant scientific mind, Moniz, 68, is a descendant of Azorean immigrants from São Miguel Island, Azores.

A Massachusetts Institute of Technology (MIT) physicist, Moniz will replace Steven Chu, the Nobel Prize for Physics in 1997.

An advocate for a low-carbon future, Moniz directed MIT’s Energy Initiative, where he oversaw the publication of reports covering practically every aspect of energy production. The MIT’s Energy Initiative is a research group that focuses on innovative ways to produce power while curbing greenhouse gas emissions. The research group gets funding from industry heavyweights including BP, Chevron, and Saudi Aramco.

Moniz graduated from Boston College (B.S.) in 1966 and Stanford University (Ph.D.) in 1971. He was a Cecil and Ida Green Professor of Physics and Engineering Systems and director, MIT Energy Initiative, Massachusetts Institute of Technology, 2001 to present; served as the Energy Department’s undersecretary in the Clinton administration from 1997-2001; was associate director for science, White House Office of Science and Technology Policy from 1995-97; and was physics professor at MIT from 1973-1997.

Last month, President Obama has appointed Portuguese-American attorney, David Simas, Assistant to the President and Deputy Senior for Communication and Strategy. A native of Tauton, Massachusetts, Simas, 42, is also of Portuguese descent.

President Obama also promoted current Environmental Protection Agency official Gina McCarthy to lead the agency and announced his choice of Sylvia Mathews Burwell, president of the Walmart Foundation, to lead the White House budget office. All nominees must be confirmed by the Senate. Read more >>