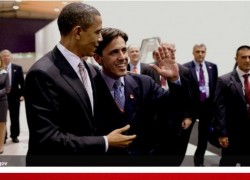 President Barack Obama has appointed Portuguese-American attorney, David Simas, Assistant to the President and Deputy Senior for Communication and Strategy.

A native of Tauton, Massachusetts, Simas, 42, is the child of Portuguese immigrant parents.  His mother, Deolinda Matos Simas, is from Abela, Alentejo, mainland Portugal. His father, António Simas, is from Faial da Terra, São Miguel, Azores.

A graduate of Stonehill College (1992) and Boston College Law School (1995), David Simas joined the Obama administration in 2009, where he worked as President Obama’s deputy assistant and aide to White House senior advisors, David Axelrod and David Plouffe.  In November 2010, Simas traveled with the President to Portugal for the NATO Summit in Lisbon.  In 2011, he left the White House to serve as Director of Opinion Research for Obama’s 2012 re-election.

Earlier this month, Simas ruled out speculation that he might run for office in his native Massachusetts. He told the Boston Globe, he plans to remain in Washington to support President Obama’s agenda.