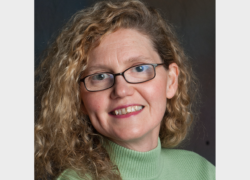 UMass Dartmouth recently announced that Dr. Paula Celeste Gomes Noversa was chosen as the new Director of the Center for Portuguese Studies and Culture.

The Center for Portuguese Studies and Culture, established in 1975, is a multidisciplinary international education and outreach organization dedicated to the study of the language, literature, and cultures of the Portuguese-speaking world.

“I am thrilled that Paula was chosen as the next Director of the Center for Portuguese Studies and Culture,” said UMass Dartmouth Robert E, Johnson. “She brings a wealth of knowledge on the past experiences of the Portuguese community while maintaining a focus on the future of how UMass Dartmouth can strengthen its relationship with the Portuguese speaking world for the betterment of our students, faculty, region, and society at large.”

Specifically, the Center brings together UMass Dartmouth and other institutions involved in Portuguese studies both abroad and the United States. Over the past several years, the University has collaborated with multiple higher education institutions in Portugal to create unique learning and teaching experiences. The Center also houses Tagus Press, a leader in publishing Portuguese literature, history, and culture for an English-speaking audience. Tagus Press’s groundbreaking translations and journals address both Portuguese lives abroad and in the United States.

“As Director of the Center, I hope to build upon my predecessor’s successes. I have several initiatives meant to broaden the scope and reach of Tagus Press, strengthen the Center’s connection with the community, support our 4+1 students training to be Portuguese language teachers, and create a new home for the Center for Portuguese Studies and Culture on campus.”

Noversa is currently the Faculty Director of the Ferreira-Mendes Portuguese American Archives and a lecturer in the History program. Noversa’s term begins on July 1, 2020.

Dr. Paula Celeste Gomes Noversa was born in Fall River after her parents immigrated from Sequeira, a small village outside of Braga, mainland Portugal in 1960. She graduated from BMC Durfee High School before earning a dual degree in History and Portuguese Literature at UMass Dartmouth. Noversa earned her doctorate at the University of New Hampshire, Durham where she was the Prince Henry the Navigator and Portuguese Discoveries Graduate Fellow. In that capacity, she was the Assistant Editor of the journal Portuguese Studies Review. She was a Camões Institute Fellow at the University of Lisbon as well as a Truman Scholar at the Truman Presidential Library in Independence Missouri.