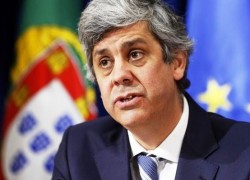 The appointment was decided in a secret ballot at a finance ministers meeting in Brussels on Monday. He attained support and prestige in the European circles after his valuable participation in economic policy debates.

The Eurogoup is currently lead by the Dutch Finance Minister Jeroen Dijsselbloem, who will to be replaced early next year. Centeno will take up his post on January 13. His term will last for two and a half years.

Centeno, who has eased up on austerity in Portugal by pushing more growth-oriented policies, will still keep his role as Portugal’s Finance Minister.

“It’s an honor because of the relevance of this group, of the quality of all my colleagues, of the importance of the job we have to carry over the coming couple of years,” Centeno said following his victory

“We are confident this will represent a turning point for the future development of the Eurozone and for the whole of Europe,” said Gianni Pittella, leader of the S&D Group in the European Parliament. “We are finally overcoming the era of blind and stupid austerity that has left behind even more poor and divided societies across Europe,” he concluded.

Portugal was one of the four Eurozone countries that had to be bailed out in the past few years when, in 2011, it needed a 78 billion-euro ($93 billion).  In order to get the budget deficit down, as a condition the country was forced to enact austerity measures such as deep cuts in public spending along with higher taxes and lower pensions.

The Eurogroup holds monthly meetings, to discuss economic and financial affairs, taxation, customs and matters related to the European Central Bank. The body also defines strategies in the main economic areas and sets the agendas for Eurogroup meetings. Its main task is to ensure close coordination of economic policies among the member states with the goal of promoting stronger economic growth.