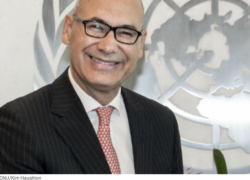 Francisco António Duarte Lopes, 59, has been appointed the new Ambassador of Portugal in Washington. A career diplomat, he has served as permanent representative of Portugal to the United Nations (UN) since 2017.

He replaces Domingos Fezas Vital who became Ambassador of Portugal to the United States in 2015.

Prior to his appointment as  Permanent Representative of Portugal to the United Nations, Ambassador Mr. Duarte Lopes served at Portugal’s Ministry of Foreign Affairs in Lisbon, where he was promoted to the rank of Ambassador in December 2015.  He had previously assumed the rank of Political Director in July 2014.  He was Director-General for European Affairs from January 2012 and Chief of Staff to the Secretary of State for European Affairs from June 2011 to January 2012.  From October 2009 until June 2011, he was the diplomatic adviser to the Prime Minister.

From August 2005 to September 2009, Ambassador Duarte Lopes was the coordinator at Portugal’s Permanent Representation to the European Union, where he was previously Counsellor in charge of Institutional Affairs.  From 2003 to 2004, he was Director for Institutional Affairs at the Foreign Ministry.  Prior to that he served as an adviser to the Secretary of State for European Union Affairs from 2002 to 2003.

He also headed the Ministry’s Human Resources Section between 2000 and 2002 and served as Chargé d’affaires at Portugal’s Embassy in Denmark from 1995 to 200.

Born in Castelo Branco, Portugal, Ambassador Duarte Lopes holds a law degree from the Faculdade de Direito de Lisboa. He began his professional service as an attaché in the Foreign Ministry’s Consular Section in 1989, before being posted to Pakistan from 1993 to 1995.

The Embassy of Portugal in Washington, D.C. is located at 2012 Massachusetts Avenue NW and can be contacted by telephone on 202 35 054 00 as well as by email info@embassyportugal-us.org.

A career diplomat, Ambassador Domingos Teixeira de Abreu Fezas Vital joined the Portuguese Foreign Service in 1984. He served as Diplomatic Advisor to the last Portuguese Governor of Macau, as Portugal prepared to hand over the territory to China in 1999.  From 2012 to 2015, he was Permanent Representative of Portugal to the European Union.

In 2019, he was the recipient of the Diplomat of the Year Award from the Confederation of Portuguese Industry, for his role in promoting economic relations between Portugal and the United States.

*Report a correction or typo to editor@portuguese-american-journal.com. We are committed to upholding our journalistic standards, including accuracy