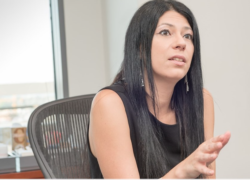 The team will prepare a guide for the creation of the National Artificial Intelligence Research Center, a platform for sharing research and providing artificial information to AI students and researchers.

According to the official news release, issued by the National Science Foundation, the task force will make recommendations for establishing and maintaining this platform. It will also have to send two reports to Congress, with a development guide and implementation plan for this tool. The interim report will be submitted in May 2022 and the final report in November of the same year.

Braga, who moved to the United States in 2012 and founded DefinedCrowd three years later, said she was “truly honored and humbled” by this appointment.

DefinedCrowd – which specializes in collecting, processing and structuring training data for artificial intelligence – was included in Forbes America’s top 50 most promising artificial intelligence companies in 2019. That same year, CB Insights – a business analytics platform and global database – classified it as one of the top 100 most promising AI startups in the world.