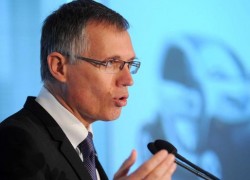 Tavares joined PSA in January in preparation for the appointment.  He will take over from Philippe Varin as president of the managing board on March 31.

In June 2011, Carlos Tavares, the former head of Nissan Motor for the Americas, based in Tennessee, USA, was appointed chief operating officer (COO) for French car maker Renault, the number two post after the company’s CEO.

He is expected to announce a major restructuring at PSA Peugeot-Citroën with new shares being issued to China’s Dongfeng Motors and the French government in  a deal worth € 3 billion.

“This company has the potential to become a global car company,” Tavares told analysts on a conference call Tuesday.

Five years after the Renault-Nissan Alliance was founded in 1999, he joined Nissan as Program Director and was named Vice President, Product Strategy and Planning Strategy in 2004.  He became Executive Vice President of Nissan and joined the Board of Directors in 2005.

An automobile and motor sports enthusiast, after graduating in 1981, Tavares joined Renault immediately as a test-driving engineer at the Aubevoye test center.  He has been car racing for 33 years, rallying in Formula 3 and the World Series by Nissan World.

Carlos Tavares was born in Lisbon, Portugal where he attended the Lycée Français before entering preparatory classes in 1976 at Lycée Pierre Fermat in Toulouse, France.  He graduated from École Centrale in Paris, France, in 1981.  École Centrale de Paris, founded in 1829, is one of the oldest and most prestigious engineering universities in France.