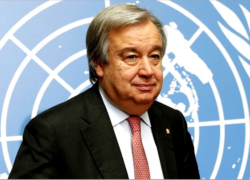 The UN General Assembly unanimously elected António Guterres, by acclamation, as the ninth secretary-general of the United Nations, to a second five-year term, ending in 2026. He will begin his second term on January 1, 2022.

António Guterres was elected for the first term, by the 193-member assembly, to succeed Ban Ki-moon, in October 2016. He served as prime minister of Portugal from 1995 to 2002 and was the UN High Commissioner for Refugees from June 2005 to December 2015.

Guterres urged the UN member nations to do everything they can “to overcome current geostrategic divides and dysfunctional power relations.”

He also committed himself “to ensure the blossoming of trust between and among nations, large and small, to build bridges and to engage relentlessly in confidence building” — and to “seek to inspire hope that we can turn things around, that the impossible is possible.”

Under the U.N. Charter, the General Assembly appoints the secretary-general on the recommendation of the Security Council.

This year, seven individuals submitted applications to be secretary-general without backing from any government, including most recently former Ecuadorian President Rosalia Arteaga.

For decades, all UN Secretary-Generals have served two terms, with the exception of the Egyptian Boutros Ghali, who was rejected by the USA for re-election in 1996.

António de Oliveira Guterres, 72,  is the ninth secretary-general of the United Nations. A career politician he also served as president of the European Council (2000) and president of the Socialist International (1999-2005). As UN High Commissioner, he headed one of the world’s largest humanitarian organizations with a budget over USD $6.8 billion (2015) and more than 9,000 staff, working in 123 countries, providing assistance to over 46 million displaced people worldwide. He is fluent in Portuguese, French and Spanish. The role of the Secretary-General is critical in promoting world peace and stability. His main job is to oversee world crises such as refugees, pandemics, human rights and climate change. He manages a staff of 44,000, not including 104,000 peacekeepers.