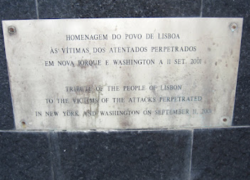 Lisbon, the capital of Portugal, was the first city in the world to honor the victims of the terrorist attacks on the Twin Towers of the September 11, 2001, with a monument dedicated on October 11, 2001.

The monument, built in metal and granite representing a ruin of the “World Trade Center”, was executed by the sculptor Augusto Cid and is located at the intersection of Avenida de Roma and Avenida dos Estados Unidos da América.

An inscription on the base of the structure reads: “Tribute of the people of Lisbon to the victims of the attacks perpetrated in New York and Washington on September 11, 2001” 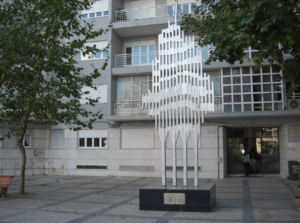 Monument built in Lisbon to honor the victims of 9/11.

Among the people who died were five Portuguese. Some worked in the Twin Towers, others were at the World Trade Center when the tragedy happened.

João Aguiar Costa, at the time 30 years old, was vice president of a brokerage and asset management company, which operated on the 87th floor of the south tower.

Carlos da Costa, 41, an electronics engineer at the Maritime Authority, died trying to help other people escape from the towers.

António José Carrusca Rodrigues, 36, who also worked at the Maritime Authority, died on his way to the underground floors to get masks and oxygen bottles to help other victims.

Interior decorator Manuel da Mota, 43, headed to the World Trade Center for a work meeting. Two minutes after he arrived at the scene, the first plane crashed.

António Augusto Tomé Rocha, 34, who worked at the World Trade Center, died at the Cantor Fitzgerald Securities, which occupied floors 101, 103, 104 and 105 of the north tower, the first to be hit.

The September 11, 2001, suicide attacks against the United States, carried out by the radical al-Qaeda terrorist group, left nearly three thousand dead in New York City and the Pentagon in Washington, DC. The victims were 246 in the four planes that hit buildings, 2,606 in New York City and 125 at the Pentagon. Most of the deaths that occurred were civilians, except for 55 military personnel who were at the Pentagon. On the same day, United Airlines Flight 93 was also hijacked by al-Qaeda terrorists, crashing in the Pennsylvania countryside, outside of Shanksville, killing the 40 passenger and crew members on board.